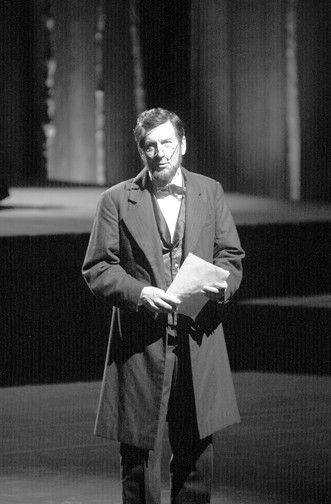 Los Angeles-based actor Geoffrey Wade portrays Abraham Lincoln in "LINCOLN: Upon the Altar of Freedom," running now through Aug. 7 at the Lincoln Ampitheatre in Lincoln City.

LINCOLN CITY -- I couldn't tell you when I became aware of Abraham Lincoln.

It seems like I've known about him my whole life, and I can rattle off the basic facts about him.

He was the 16th president of the United States. He was tall, had a beard and wore a stovepipe hat. His birthday was in February. He freed the slaves and wrote the Gettysburg Address. His wife was Mary Todd Lincoln.

He was assasinated at Ford's Theatre in Washington, D.C. by John Wilkes Booth in April 1865.

In my mind, Lincoln died instantly when he was shot. But thanks to the play "LINCOLN: Upon the Altar of Freedom," I learned that he actually lay dying for nine hours.

The play, which was beautifully staged and acted, opened Friday at the Lincoln Ampitheatre in Lincoln City and will run through Aug. 7.

The story, written by playwright-in-residence and the Rosenthal Endowed Chair of the Department of Theatre and Dance at Northern Kentucky University Ken Jones, starts from the end -- the first scene depicts Lincoln's assassination.

The audience is then taken on a journey through Lincoln's memories and subconcious as the president lies dying.

We are taken back in time to Lincoln's boyhood, where he spent several years living on a farm in Spencer County.

We watch as his mother Nancy dies, and the 9-year-old Lincoln and his sister Sarah come to grips with that loss. We watch as Lincoln's relationships with his father Thomas and stepmother Sally develop.

We see a young Abraham Lincoln devour books and poetry. We see him begin his law practice, meet and marry Mary Todd and have four sons (two of which her buried before he died).

We see him witness for the first time the conditions slaves were forced to live in, and we come to understand that for Abraham Lincoln, freeing them was something he began to think about long before he became president.

We watch Lincoln face and overcome harship over hardship, knowing all the while he will become the leader of the United States.

We watch as he leads the nation through the horrors of the Civil War.

Abraham Lincoln is played with amazing accuracy by Geoffrey Wade, a Los Angeles-based actor with an impressive list of Broadway, off-Broadway and television credits.

The entire 29-members cast does a more than admirable job of bringing the story of the 16th president to life.

History and Civil War buffs will love "Lincoln" for the authentic period costumes and music and the inclusion of some well-known historical figures (such as Ulysses S. Grant and Frederick Douglass).

As a parent, I was struck by the teachable moments the play provided for my 8-year-old son. Watching the performance brought up questions about slavery and family ties as well as U.S. history.

The action of the play is a little hard to follow at times -- it jumps back and forth from the woods of Spencer County to the White House very quickly. But if you follow along in your program, you can keep up. The dates being depicted are also flashed intermittently on a screen above the stage.

The 1,500-seat ampitheatre, located within Lincoln State Park, is breathtaking. The staff has worked hard to make it a pleasant place to sit and watch a show as evening falls. Insect control has obviously been a priority, as I didn't see one mosquito the entire evening.

The only problem is no one can control airplanes or helicopters, and when they fly past during the performance it can be distracting.

More information on "LINCOLN: Upon the Altar of Freedom" can be found online at www.lincolnampitheatre.com. Tickets can be ordered online or by calling (812) 937-9730.