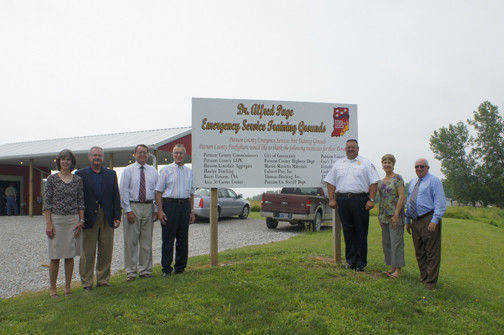 GREENCASTLE -- Alfred "Doc" Page has been a leader in Greencastle and the Putnam County community since 1969. It is hard to speculate how many lives he has touched through his many years of training as a firefighter.

He is a founder of Operation Life, which evolved out of DePauw University. He taught the first classes to train students and citizens how to treat patients and bring them to PCH for further treatment. He continued to gain more and more knowledge to share with his classes, as he saw a vast need for individuals to learn about firefighting, auto extrication and technical rescue. He gained certification in those areas and received a degree in fire science from the University of Cincinnati.

Even though Doc has taught hundreds of classes over the years, he still continues to build on his knowledge and share it with the community.

Doc defines the meaning of hero as one that goes above and beyond to help others in times of trouble and need. It was through his vision of a better way to train firefighters the idea for a training facility in Putnam County was born.

On June 12, The Putnam County Emergency Services Training Grounds was rededicated as the Dr. Alfred Page Emergency Services Training Grounds. It was made possible through the efforts of primary funding from the Department of Homeland Security Infrastructure Grants, all Putnam County fire departments and private donations from individuals and businesses.

Doc's commitment to safeguarding lives by preparing responders for any situation they may encounter became his passion -- one good reason to dedicate the fire-training site in his honor.

Currently, Doc is a reserve member of the Greencastle Fire Department and serves as one of the safety officers. At the age of 77, he is still doing what he loves -- helping others in need and teaching people how to help others.

"GFD is proud to serve with such an exemplary firefighter and mentor," said fire chief Bill Newgent.