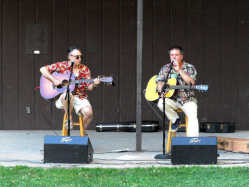 The Mongrel Dogs, Istvan Csicsery-Ronay, left, and Ron Dye, will play Parkfest at the Robe-Ann Park bandshell from 7 to 8 p.m. Tuesday.

GREENCASTLE -- Concert-goers and farmers market shoppers will be treated to the music of the Mongrel Dogs from 7 to 8 p.m. Tuesday at the Robe-Ann Park band shell.

The Mongrel Dogs -- Istvan Csicsery-Ronay and Ron Dye -- have been playing music as a duo together since 2007. The two singers and guitarists have a repertoire of songs drawn from a wide range of music genres, from old-time country and country blues to contemporary folk and soul, among others.

They fondly describe their music as "mongrel" music because they enjoy blending stylistic elements from different kinds of music and make no attempts to present traditionally derived music in an "authentic" way.

"We practice a lot more than we perform, if what we do on a weekly basis can be called practicing," Dye said. "We get together and play music, sometimes a bunch of different songs and sometimes the same two or three songs over and over. We've tried hundreds of songs from various genres.

"The songs we both like a lot tend to find their way into our performances, either very quickly or eventually," he added. "The way we practice and choose songs is sometimes organized and at other times very unorganized. We have fun."

Both Dye and Csicsery-Ronay maintain that whatever style they have as a duo is determined by what they are unable to play.

"We try all kinds of things, but no matter what the material was originally supposed to sound like, it all ends up sounding like us, but we're okay with that," Dye said.

Csicsery-Ronay and Dye are professors at DePauw; both teach in the English Department, and Dye also teaches in communication and theatre, as well as coordinating DePauw's Performing Arts Series.

This will be the third year the duo has performed at the summer Parkfest at Robe-Ann Park.

As with most weeks, the Tuesday evening farmers market will also take place at Robe-Ann from 5 to 8 p.m.