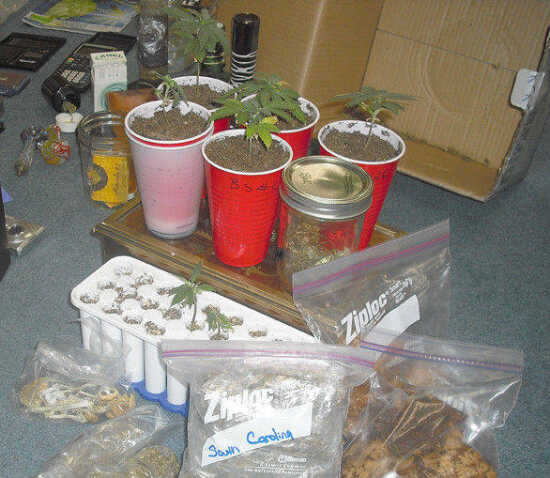 Michael A. Johnson, 26, has been charged with Class C felonies dealing in marijuana and possession of a controlled substance and Class D felony maintaining a common nuisance.

Johnson's housemates, Daniel Frost, 23, and Dominique York, 24, have both been charged with Class D felony maintaining a common nuisance.

Officers found approximately 281.3 grams (just a little over a half-pound) of a green, leafy substance that was field-tested and later determined to be "marijuana ready for distribution," Hopkins said.

Also found at the residence were seven live marijuana plants, the remains of a marijuana growing operation, a sandwich bag containing hallucinogenic mushrooms, a .380 caliber handgun, approximately 75 rounds of .380 ammunition, and several pipes and "bongs" believed to have been used for marijuana use.

Information from the bust was forwarded to the Putnam County Prosecutor's Office, and formal charges were filed Monday.

Frost and York were both released Monday afternoon after posting 10 percent of $10,000 bonds. Johnson remains in jail in lieu of a $20,000 cash only bond.

Comments
View 38 comments
Note: The nature of the Internet makes it impractical for our staff to review every comment. Please note that those who post comments on this website may do so using a screen name, which may or may not reflect a website user's actual name. Readers should be careful not to assign comments to real people who may have names similar to screen names. Refrain from obscenity in your comments, and to keep discussions civil, don't say anything in a way your grandmother would be ashamed to read.