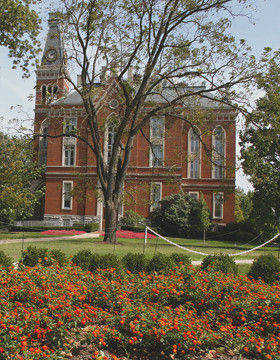 DePauw University is listed among "40 overlooked gems" in the new book, "Acceptance: A Legendary Guidance Counselor Helps Seven Kids Find the Right Colleges -- And Find Themselves." It is the only institution of higher education in Indiana on the list.

GREENCASTLE -- DePauw University is listed among "40 overlooked gems" in the new book, "Acceptance: A Legendary Guidance Counselor Helps Seven Kids Find the Right Colleges -- And Find Themselves." Authored by David L. Marcus and published by Penguin Books, "Acceptance" has just arrived in bookstores.

Other schools identified as "hidden gems" include Kenyon College and Miami University (both in Ohio), Whitman College (Washington) and Furman University (South Carolina). DePauw is the only institution of higher education in Indiana on the list.

"The college application process is a time of major anxiety for high school seniors and their parents," notes Publishers Weekly. "Fortunately for all concerned (including administrators, teachers, and private coaches), Marcus, the Pulitzer Prize--winning education writer for U.S. News and World Report, has documented the year he spent at suburban Long Island's Oyster Bay High School closely observing the rather unorthodox college counselor Gwyeth Smith and seven college-bound seniors.

"In this insider's look at the college application process, Marcus reveals the personal realities the kids and their parents face, the way college decisions are made and how and why Smith manages to ease the powder keg of worry and emotions with good advice, eventually helping make the right match for each student," the article continued.

The review calls "Acceptance" "a wonderfully enjoyable antidote to the spate of books focused on the college admissions game of getting in."

The 2009 National Survey of Student Engagement finds that the student experience at DePauw University provides far more academic engagement -- both in and out of the classroom -- than what is provided to undergraduates at peer institutions and the national average at all colleges and universities.

DePauw is rated among the nation's top 50 liberal arts colleges "that combine outstanding economic value with exceptional education," according to the December 2009 issue of Kiplinger's Personal Finance.

DePauw University has one of the highest graduation rates among America's institutions of higher education, according to a national report issued in June 2009.

For the fourth consecutive year, DePauw University is listed among the "Top Producers of Fulbright Awards for U.S. Students" in a chart published in October in the Chronicle of Higher Education. It's also again one of the top colleges in the nation for the percentage of its students who study abroad, according to the 2009 Open Doors report.