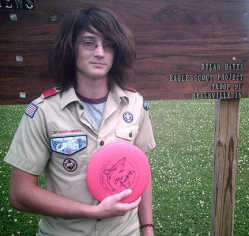 GREENCASTLE -- When it came time for Dylan Hayes to construct his Eagle Scout project in the spring of 2009, he had a chance to not only build something to serve his community, but also something he could enjoy personally.

Hayes chose to make his project a nine-hole disc golf course on the grounds of Central Elementary School and South Putnam High School.

"I like the sport and I noticed there weren't many courses around," Hayes said.

At the time of the course's construction, there was not yet one at Big Walnut Sports Park.

With that, he saw a chance for his interests of scouting, which he had done since he was 11, and disc golf to intersect. He got his start playing at Brazil's Forest Park and in Avon.

Soaring Eagle Frisbee Golf Course, as he named it, starts behind Central then winds its way around the school and toward the front of the high school property. It ends with two holes between the high school tennis courts and U.S. 40. 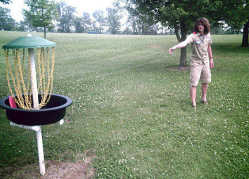 Eagle Scout Dylan Hayes completes a hole of frisbee golf at the Soaring Eagle Frisbee Golf Course he created for a project. Hayes is part of Reelsville Troop 91.

Hayes said word is slowly getting out about the course. While he hasn't officially posted any information about it online, some of his fellow players at Forest Park have referred people to it. The school has also fielded calls about the course.

"The school got lots of calls, and they had to refer people to me," Hayes said. "I see a few people playing on it as I pass the school."

While the physical work of building the course took Hayes and Reelsville Troop 91 about two weeks, the planning phase was much longer. Besides playing other courses to get ideas, he also had to get school approval.

After getting the approval of the principal and vice principal at Central, he had to twice appear before the South Putnam School Board.

Because much of the course centers around the elementary school, Hayes said he chose to make the course shorter than a number of the others on which he's played. The holes range in length from 120 feet to 390 feet.

"I wanted to make sure it would be used," Hayes said.

However, he felt the need to add some difficulty, so he tried to stay close to things, with holes No. 4, 6 and 7 all hugging tree lines.

"I was looking for some obstacles, so a lot of it is near the edges of things," Hayes said.

Obstacles also come from the natural elevation changes on the property around the school. A four-year cross country runner at South Putnam, Hayes knows the land one which his course is built all too well.

"I knew exactly what it was like to go up and down the hill," he said with a laugh.

A graduate of South Putnam in May, Hayes is bound for Ball State University, where he plans to study computer science.