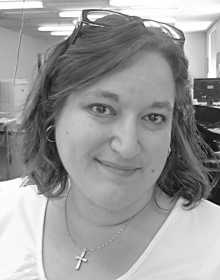 I've been acting in plays since I was 15 years old.

Yep, I've been involved in theatre, whether it be high school, college or community, for a quarter of a century.

Hardly seems possible, but I've done the math and it's true.

As I look back over my career, I can only think of one role I had that I really and truly hated -- Miss Brill, the evil teacher in "Cheaper by the Dozen."

I have a mental block against "My Fair Lady," but it has nothing to do with the show itself nor the part I played.

You see, when I was a junior in high school, I was second chair trumpet in the band (boy, I just sound cooler and cooler, don't I?). I was desperately in love with David Fillmore, the first chair trumpet player, who was a year older than I and was also in the Drama Club with me.

Imagine my devastation to see the cast list go up the day after "My Fair Lady" auditions, only to discover my secret crush had been cast as Henry Higgins, and I had been cast as ... wait for it ... HIS MOTHER.

The point I was going for is that I have played a lot of really great roles ... Countess Aurelia in "The Madwoman of Chaillot," Elizabeth Proctor in "The Crucible," Frenchy in "Grease."

All great characters, all fictional women I grew to care about.

In my latest theater outing, I played the small supporting role of Violet Bradman in the Putnam County Playhouse's production of "Blithe Spirit."

I wasn't sure how I felt about Violet at first. She was a doctor's wife, which was pretty much the classiest thing about her.

Despite her place in high society, Violet was kind of a ditz. She said dumb things. She seemed naive almost to the point of stupidity.

She chugged martinis and had very little social grace.

For some reason ... I couldn't begin to tell you why ... Violet's voice came out of me high-pitched and just a little ... well, grating.

After a few rehearsals, though, I started imagining a backstory for Violet.

Maybe she had grown up poor. Maybe she had never had much when she was young, and now that she did she just wasn't sure how to handle it.

Now that she was in a world where the servants were actually there to do her bidding, she didn't know how to treat them. When the maid came to take away her coffee cup, was she supposed to acknowledge her? Should she look at her at all?

The way I chose to play Violet, she was afraid of judgment and of making any social missteps, even though she ended up doing it with great frequency.

And you know what? She really didn't. I believed her.

When we got our costumes, Violet had huge jewelry ... a great big necklace and chandelier earrings set with glittering stones.

Unconsciously, I began touching those baubles a lot as I said my lines and moved about the stage. In my mind, Violet was so grateful to have these things that she A) still couldn't quite believe they were really hanging from her neck and ears and B) was scared to death of losing them.

For most of her stage time, Violet wore a flowing evening gown made of silver satin. As I watched the DVD after the performance, I saw that she was very careful about lifting the dress so she didn't step on it, and about smoothing it when she sat down so it didn't get wrinkled.

Before I saw it coming, I had grown to love Violet Bradman.

I started to find her little social faux pas charming. I started making her more animated, to the point that sometimes I felt like I was walking a fine line between making her a believable person and turning her into a cartoon character.

Sure, she had her flaws.

But as is the case with all of us, there are lots of reasons we've turned out the way we have.

We can get irritated with people ... with the way they talk, dress, chew their food, whatever.

What we don't know is why they do those things. There could be reasons there we have no idea about.

I know there were with Violet.

So now it's over, and I miss the old girl. When I got my script in mid-May, I thought, "How in the heck am I going to make this woman even remotely likeable?"

My director would just smile knowingly at me. I think he knew I had it in me from the outset. Sometimes people know things about us well before we ever suspect them about ourselves.

I don't know if I made Violet likeable for anyone else, but I do know that I grew to think of her as a friend, and I'm sad to have lost her.

Jamie Barrand is the editor of the Banner Graphic. Her e-mail is jbarrand@bannergraphic.com.