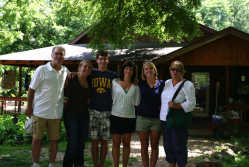 GREENCASTLE -- A former Greencastle resident working as a community coordinator for placing foreign exchange students with local family reports there is a shortage of placements in the area.

As a community coordinator for the Program of Academic Exchange (PAX), Theresa Robbins acts as liaison between host families and potential exchange students in high schools in both placement matching and supervision.

Now living in Hanover, Robbins said this year there aren't any foreign exchange students living in Greencastle who she knows of.

Robbins attributes the shortage of exchange students to the fact that a lot of people don't know such a problem exists.

According to the Council on Standards for International Educational Travel, it's recommended that 1 percent of a school's population be foreign exchange students so that other students can adequately bond with them, she said.

"It puts more pressure on the exchange student to expose others to that culture if there is only one," Robbins said.

In her time as a coordinator Robbins has placed more than 50 students with host families, and in the past year has had the chance to host a student in her own family.

Robbins and her family recently hosted Fernando Vallejo from Spain. Vallejo spent 10 months with the family and returned to his home country June 14.

Robbins said the family instantly fell in love with him.

"We definitely have deeper appreciation for Spain," Robbins said.

Wade Hazel of Greencastle and his family hosted Marta Torre, also from Spain, nearly three years ago and had a positive experience.

Hazel, who has a daughter, Emma, and a son, Xander, described the experience as "just like having another kid."

Hazel said the family still stays in touch with Torre, who now is in pharmacy school in Spain, and plans to visit with her family again this winter.

"We thought it would be a good experience for our children to indirectly experience another culture," he said. "That's the best thing we took away."

For more information on how to become a host family, call Theresa Robbins or the PAX toll-free number 1-800-555-6211 or visit www.pax.org.