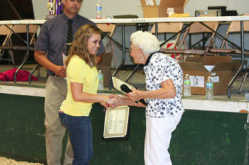 GREENCASTLE -- Forty-nine 10-year 4-H members were honored Thursday night in the Inside Arena at the Putnam County Fairgrounds. Five 4-H members were also awarded scholarships during the awards ceremony.

Denise Sigworth, President of the Putnam County Community Foundation, addressed the crowd at the beginning of the evening and informed the audience of the impact their generosity has had on the community. Sigworth stated the Foundation has put $7 million back into Putnam County in the past 25 years.

Sarah McEnulty and Grace Aker were honored with the Tenure Award, an award given to two 4-H members with the greatest number of projects through throughout their 4-H career.

This year's 10-year members were awarded a plaque and two savings bond, one from Teacher's Credit Union and one from the Putnam County Republicans.