By ANDY BARRAND, For the Banner Graphic 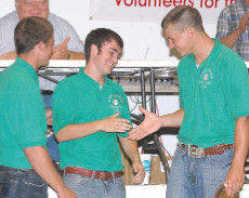 GREENCASTLE -- After three years of competing for Putnam County's top honor at the 4-H Fair, Garrett Porter finally came away with the trophy.

Standing in front of a packed show arena Porter, along with the five other senior showmen, waited anxiously before hearing his name called as Supreme Showman.

As soon as his name was announced, Walter Colvin and Cody Beck, fellow 4-H'ers and friends congratulated Porter. The three are all students at North Putnam High School.

"This award means a lot to me coming out of the dairy barn," said Porter. "I am very excited to win."

Colvin, who was runner-up this year, was also a third-time competitor. All three years Colvin has earned the runner-up trophy.

"It is a real honor just to be in the competition," said Colvin. "It means a lot to be able to show amongst my peers. This is the highest honor that you can win as a 4-H'er."

Going into Thursday night's competition, Porter said he looked to his friends in the other barns to help him with the species that he had never shown before. 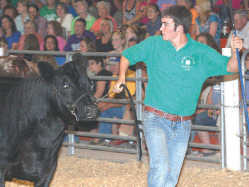 "I have a lot of friends that took the time to help me," said Colvin.

"The hardest animal for me to show tonight was probably the horse," said Colvin. "Horses are used to their owners, so it is harder to show them if you are not used to them."

Both Colvin and Porter are nine-year 4-H members. They will both be coming back next summer to complete their 10th years in 4-H.

After the showing of the final species of the night, swine, Billy Roberts, swine judge, commended all of the contestants on all of their hard work.

"You guys here in Putnam County always have great showmen," said Roberts. "They have all worked hard this year."

Roberts said one of the things he looks for when judging swine competitors is constant eye contact between the competitors and the judge.

All of the judges in the five other species of animals echoed Roberts' statements about the competitors.

Representing the Horse and Pony club was Emily Gilley; the sheep barn competitor was Vittoria Gygi; Marly Weed represented the goat barn; and Cody Beck showed for the beef barn.

Weed said if it wasn't for her parents' help and encouragement, she never would have made it to the contest.

"I can remember my first year as a 4-H'er being dragged around the ring by this large goat," she said.

Gygi, an eight-year 4-H member, was the youngest competitor Thursday night. At the age of 16, she said it was an honor to be in the ring competing.

"There is something special about livestock people -- they are always there to help you," she said. "I never thought that I would have achieved this honor."

The Jim Baugh Memorial Fund and the Baugh family sponsored shirts for all the competitors. The contestants were treated to a lunch earlier in the day sponsored by Farm Credit Services.