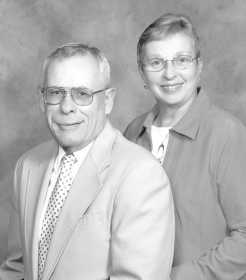 Joe and Helen (Rossok) Zeiner of Greencastle will celebrate their 50th wedding anniversary on Aug. 21.

They were married at the Greencastle First Baptist Church in 1960.

Joe graduated in 1956 from Fillmore High School. He served in the U.S. Air Force until 1964, when he was honorably discharged.

He retired from Public Service Indiana/Cinergy in 1996 after 33 years of service, and worked as a private consultant following retirement. He is a former international president of the Refrigeration Service Engineers Society.

Helen graduated from Greencastle High School in 1960. She is a homemaker and spent her time raising her and Joe's four children.

The Zeiners are members of Greencastle Christian Church.

They are the parents and in-laws of Jeff and Melanie Zeiner of Clayton; Mark and Kim Zeiner of Mason, Ohio; Todd and Lisa Zeiner of Fillmore; and Kim Couch of Evansville.

Their grandchildren are Heath and Victoria Zeiner of Clayton; Layton, Nathan, Lindsay and Amanda Zeiner of Mason, Ohio; Bethany, Lydia, Megan and Dallas Zeiner of Fillmore; and Carlie and Halie Couch of Evansville.

They are the great-grandparents of Makaylah Bergwitz of Evansville.

Joe and Helen's children and grandchildren are hosting an open house in their honor from 1 to 3:30 p.m. Aug. 21 at Greencastle Christian Church, 620 Primrose Lane.

Friends and family are invited to the open house, but the couple requests no gifts.