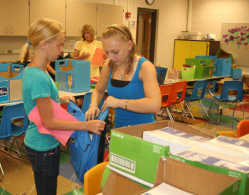 FILLMORE -- Good deeds are kind of like snowballs: just get them rolling, and they'll gather their own momentum. You never know how big they'll get.

What started as a simple goal for the vacation Bible school at Fillmore's Bethel Missionary Baptist Church to provide backpacks to Fillmore Elementary students took on a life of it's own earlier this summer.

It culminated with volunteers from the church handing out not only backpacks at registration earlier this week, but all school supplies to every one of the school's 180 students.

Pastor Nathan Couch said it started as simply trying to do something for the community.

"One of the things we're always talking about in our church is, 'Are we thinking inward-focused or outward-focused?' With everything we're doing, we're trying to take it and be outward-focused with it," Couch said.

"When we asked what we were going to do to make our mission for vacation Bible school outward focused, we kind of talked about maybe just providing backpacks," he added.

And so it was. At Bible school, the children were challenged to bring in change. Each night, the change from various groups of children were weighed to see what group could bring in the most change.

"At the end, we were amazed that there had been like $500 worth of change," Couch said. "That's a lot. For 80 kids to come up with that much money, we felt like if they could make that commitment, then we could make the rest of the commitment."

By this point, though, the project had become a church-wide effort. Rather than providing just backpacks, the church was thinking of providing everything -- pencils, paper, crayons, markers, scissors, folders and all the rest.

Parents of elementary school students are familiar with the drill of getting a list of classroom supplies each student will need. The church's goal was now to fill in those lists.

"Over dinner one night, the question was asked, 'How much would it cost to supply everything?'" Couch said. "We started doing some research, and realized it was a good chunk of money it was going to take. But more than that, we felt like it was something bigger than us, and we felt like that was exactly what we needed was to do something outside of ourselves and step out a little bigger."

It didn't take too much urging to get the church community on board, though. 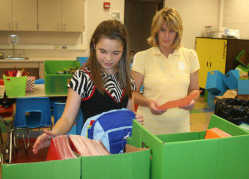 Marideth Boswell, left, picks out a folder from the collection of school supplies Bethel Missionary Baptist Church donated to Fillmore Elementary School earlier this week. Bethel volunteer Marsha Arnold assists Boswell in her selections. The church gave a gift of backpacks and all necessary school supplies to all 180 of Fillmore's students.

"We asked people to donate backpacks, and then a few weeks later we said it would take this much to make sure every child at the elementary school has a backpack and supplies," Couch said. "We had more than enough to do it within an hour.

When approached by the Couch about the initiative, Fillmore Principal Brad Hayes was glad to provide a location for the project.

"This was (the church's) initiative, and they asked if this was something that we could use," Hayes said. "We were more than open to having them do that. We were truly pleased that they were taking that initiative."

One of the big goals of the project was to make it open to everyone. There was no necessity to apply or qualify for anything. The church was on hand with enough supplies for every student in the school. Anyone who wanted could accept the gift.

"The parents have been just so grateful," Hayes said. "We've had lots of positive feedback about the program. They are just kind of shocked that they've chosen to do that. It's been a real plus for us."

A number of Bethel volunteers spent two days in the school's art room with two long rows of tables filled with supplies. After registering outside the school's office, parents and student could take their supply lists back to the art room and "shop" for whatever they needed with a volunteer.

The process makes it a one-stop process for parents, a benefit Couch had not considered.

"What we thought was that it would be a break financially to do it, but what we're finding, too, is that it's the time issue -- whether or not they have time to get to the store, the effort of taking kids to the store and getting in and trying to pick out stuff," Couch said.

For the church, the benefit is being out in the community, letting the town know the people of the church care.

"We want the people of this community to know that we're more than just a church that talks about loving the community," Couch said. "For us, that's the important thing, that they see God's love in our actions.

"The best part is, though, they've been here too. People have been in and out, connecting with the community."