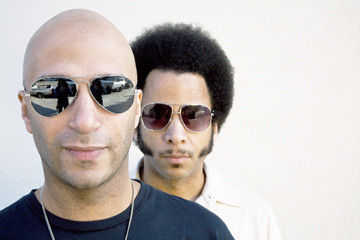 Tom Morello (front) and Boots Riley team up as Street Sweeper Social Club for the "The Ghettoblaster EP".

Supergroups are generally anything but super.

Sure, it sounds exciting to hear that Eddie Vedder and Eddie Van Halen are working together (I made that up, by the way.), but the results end up more like Eddie Money.

So the news last year that guitar virtuoso Tom Morello (Rage Against the Machine, Audioslave, The Nightwatchman) had united with rapper Boots Reilly (The Coup) wasn't really exciting to me.

But something weird happened. Their self-titled debut, released last June, was good. I mean very good.

It showed that at 45 and 38, respectively, Morello and Riley hadn't lost their ability to rock. While not as overtly political as either man's former work, it still showed the leftist political charge expected from this duo.

Fast forward a year, and the duo released "The Ghettoblaster EP" Tuesday. While it features just three new originals of the seven tracks, the record again displays the duo's ability to combine rap and rock in a form that signs neither contrived nor tired.

The record starts with a kick in the head from Morello's guitar and the drums of Eric Gardner. It lets you know this ride isn't for the faint of heart. Then Riley joins in, again displaying his penchant for catchy and radical lyrics like "A fan o' radical bandits and bandanas/ Who slam in the banana clip/ And rat-a-tat-tat-tada."

The other two originals, "The New ____ You" and "Scars (Hold That Pose)" show some creative juices left over from the debut album sessions.

The three covers on the album (M.I.A.'s "Paper Planes," LL Cool J's "Mama Said Knock You Out" and the Coup's "Everythang") show the group can take other people's material (or Riley's own) and reinvent it nicely.

The highlight of the album, though, is the extended remix of "Promenade," also the high point of the debut album. The track finds a groove not matched elsewhere on the record.

(And in spite of what I said above about Eddie Money, "Take Me Home Tonight" was awesome.)

For any fan of Morello's or Riley's past work, this is definitely worth a spin or two. If you don't like politics with your music, look elsewhere. The seven tracks are lyrically and musically intense.

However, these guys do it with a lot of flair and without brow beating the listener. They're a couple of seasoned pros who still have it.