All is 'Wright' with Scott Pilgrim's world 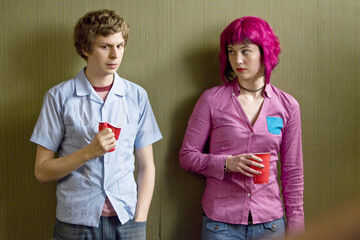 From the retro gaming Universal logo until the credits roll, Edgar Wright's "Scott Pilgrim vs. the World" is perhaps the most fun you'll have at the movies this year.

The movie won't appeal to all people, but for those it was intended to target, it will be a hit. It's one of those movies you find yourself quoting and thinking about days after the viewing and a movie you'll find yourself wanting more of.

Based on popular graphic novel series "Scott Pilgrim" by Bryan Lee O'Malley, the film follows Scott (Michael Cera), a 22-year old bassist for Sex Bob-omb, who's finding a tough go at life at the moment. Still recovering from his yearlong breakup, he rooms with Wallace Wells (Kieran Culkin) and begins dating a 17-year-old high school girl, only for the girl of his dreams, Ramona Flowers (Mary Elizabeth Winstead) to come skating into his life.

But as with every budding relationship, there's a catch. In order for Scott to date Romana, he must defeat her seven evil exes. Not exactly a task most think Scott is up for.

I believe the best way you can sum up the experience of "Scott Pilgrim vs. the World" is absolutely awesomely tiring, but in the most positive way possible. The movie is fast paced, with quick jumps in action, but I found it to be a wonderful interpretation of the comics.

Being a huge fan of Wright, I wasn't sure he was right for the material. I loved "Shaun of the Dead" and "Hot Fuzz," but those are completely different movies. What he achieves on this movie is nothing short of amazing. Not that the film will contend for any awards, but it's a crowd pleaser and that's what we need. Leave the stuffy cinema to someone else, Wright knows what an audience wants and he consistently gives it to them.

Another area where I was concerned was in the casting of Cera as Pilgrim. Cera is a likeable actor, but could he pull it off?

Again, it was a resounding yes.

Every aspect of Cera's Pilgrim is right on, and, for the first time, I could actually see him playing another type of character in the future.

Watching Winstead, it's clear why Scott is smitten with her. With her ever-changing hair color and smart attitude, she's tough, venerable and completely the type of girl guys, who the movie was intended for, would fall all over themselves to have.

Rounding out the list of crowd-pleasing performances is Culkin. He doesn't get to spend a lot of time on screen, but he makes the most of it. I'm not sure there's a scene in the movie when he isn't making you laugh.

The movie also shows that it doesn't take an inflated budget to be cool. At a rumored budget of $60 million, Wright accomplishes more with less and shows the big dogs how it should be done.

Final Cut: "Scott Pilgrim vs. the World" might just be my favorite movie of the summer. It epitomizes what summer movies should be about -- awesome fun. A great effort from Wright and his cast. A definite must see movie treat.

Scott Pilgrim vs. the World