Culture is abound in our little corner of the world

As a person who loves the arts and wants them to always thrive, I have to say I am more than a little impressed with what Putnam County has to offer.

Theater is my true passion, so I usually think of the Putnam County Playhouse first. The first production I saw there was "Singin' in the Rain" in 2008, and I was blown away by the professional quality of every aspect of the show -- the acting, singing, dancing, lighting, sound, costumes -- everything.

My son has inherited my love of theater, and we take him to see a lot of shows. We go to Beef & Boards in Indianapolis as well as to the playhouse.

We saw "Hello, Dolly!" at Beef & Boards a couple of months ago. I didn't know if Will would want to see it when it was staged at the Putnam County Playhouse in June, but he did.

About halfway through the show, my son leaned over to me and whispered, "This one is better than the last one." 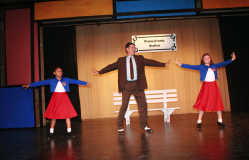 Kids don't lie about things like that. Praise like that from an 8-year-old is golden because you know it's honest. He really thought the Putnam County version -- put on by people who were just there because they loved to be onstage -- was better than the one that featured paid actors.

I got a sneak peek last night at PCPH's "Bye Bye Birdie," which opens tonight.

The cast featured teen and kid's choruses. Reading that in the program, I didn't know what to think. Sometimes kids are cute to look at, but when you get them singing and dancing ... well, they're not.

The theater department at DePauw is also outstanding. Last year, I saw productions of "Tartuffe" and "Eurydice" that just took my breath away.

My son is probably a little too young to appreciate shows like that yet, but in a year or so I imagine he'll want to start accompanying me there, too.

My mom was in town this week, and I took her to the Putnam County Museum.

She really liked the exhibits, but she was even more impressed with the artwork that lined the walls and filled the display cases -- all done by local artists.

She or I neither one can draw so much as a stick figure, so we were in awe of the beautiful watercolor paintings and chalk drawings.

My mom really liked the Peeler Pottery pieces, so I was glad I've had the pleasure of meeting Marj Peeler on several occasions and could tell Mom about what an interesting lady Marj is.

I could give her some of the history on the Peelers' pottery business that developed at their home near Bainbridge, and I could take her to the DePauw University campus and show her the art center that bears Richard Peeler's name.

Then there are the local musicians.

I love going to the Swizzle Stick or the Fluttering Duck to hear the bands play. Jazz, classical, rock, country, blues ... you name it, there is a band around here that can play the heck out of it.

The music department at DePauw also offers up some great entertainment. The orchestra is phenomenal, and they have concerts featuring instrumental and vocal soloists that are out of this world.

For being a small corner of the world, we sure do have access to a lot of culture.

Jamie Barrand is the editor of the Banner Graphic. Her e-mail is jbarrand@bannergraphic.com