Their first opponent? The heat 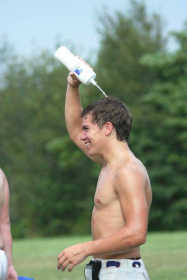 GREENCASTLE -- Across the state, high school fall athletes have spent the last week and a half battling through the dreaded first two weeks of practices. It's a lot of conditioning, a lot of mental preparation and a lot of learning.

It's also a lot of dealing with the heat.

While August is often the hottest time of the year, high heat indexes in recent days have presented unique challenges to coaches and administrators who deal with the heat issue every August.

But times have changed in sports. Gone are the days of afternoon practices in the heat of the day to get the kids to "toughen up." Understanding of the human body has come a long way in the last generation or two. There's actually a science to it.

"One thing that makes it a little bit different is the understanding of rehydration," South Putnam athletic director Matt Griswold said. "Kids aren't drinking Mountain Dew all afternoon and then going to football practice.

"The kids are staying away from pop and eating a better diet. They're rehydrating during the day," he added. "In that sense, we're much more safely equipped to deal with things like this."

This understanding starts at the top.

"We really educate our coaches, and the IHSAA does a really good job of educating the coaches through information they send out," Greencastle athletic director Scott Knapp said. "We tell them from the beginning that safety is our number one priority. Keep them hydrated and do what you can."

Something else that has changed over time is preparation. While official practices don't start until August, most athletes have spent much of the summer training, so day one of practice isn't really day one.

"Kids don't show up on Aug. 1 and say, 'Well it's time for me to get in shape to play football.' Very few of our athletes come into camp out of shape," Griswold said.

The importance of water is one thing that hasn't changed over the years. Water breaks have always been an important part of early season practice sessions. What may have changed is the frequency of the breaks.

"We water every chance we can get -- take a five-minute break every 20 minutes," Cloverdale football coach Kyle Winkler said. "We go some practice time without helmets or shoulder pads on when we want to get their brains involved more. We have also have ice cold wet towels to throw on heads."

When all else fails, some schools are simply trying to avoid the heat as much as possible.

"We're practicing late in the evenings," North Putnam athletic director Jason Sims said. "What we did during two-a-days was we went early in the mornings and two of the three days we didn't do pads and helmets in the afternoon -- just shorts and T-shirts.

"We've kept them in air conditioned rooms in the afternoons," he added. "We're not practicing until late in the evening, the later the better."

While Greencastle teams have also adopted this method, it is not shared across the board. Griswold said avoiding the heat and getting kids used to the heat is a delicate balancing act.

"We don't think it's necessarily safer to not practice and then expect kids to play a game in those conditions," Griswold said. "So what we try to do is have kids participate when it's hot where we can have them stop whenever we want them to. That way, they can, as carefully and safely as possible, become acclimated to those conditions. We don't want a football game to be the first time we play when it's hot."

Regardless of time of practice or even how much water is consumed, kids are still going to get hot. It's just part of playing sports in August. The key is monitoring their health and making sure they don't get too hot.

Both Sims and Griswold gave credit to the use of trainers for keeping the kids healthy.

"We're very fortunate to have Valerie Rayce be available to help monitor kids' health and what's appropriate to do," Griswold said.

And with or without trainers, coaches know what to look for.

"I trust all of our coaches, and they care about the kids. When we see a kid struggling and looking like they need a break, we don't force them to do anything," Knapp said.

"I also ask kids what color my shirt is -- if they say white (when I wear green) we might have problems," Winkler said. "That is a sign of heat exhaustion. I haven't had any tell me that yet."

While football, with its extra equipment, is often one of the main concerns in the heat, Griswold said all sports have to take precautions. Cross country coaches have the unique challenge of monitoring kids who are not face to face with them much of the time. Gyms are hot places, so volleyball players are also a concern.

Even girls' golf is not immune.

"We were supposed to be in the Terre Haute South Invite Tuesday, and they canceled it because of the heat," Knapp said. "That's fine. We're not upset because we know it's a safety issue."

What it all comes down to -- for athletes, administrators and especially coaches -- is making smart choices.

"Heat management is a significant part of our coaching now," Griswold said. "There's no coaches left who are saying, 'We just need to toughen up.'"