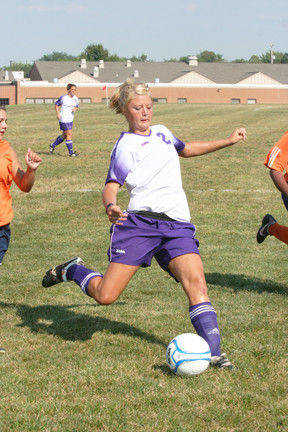 GREENCASTLE -- For any team, getting seven goals in a soccer match is a good thing. When six of those goals come from a single player, it's even better.

Greencastle senior Whitney Brotherton scored six goals in the Tiger Cubs' 7-2 win over county rival North Putnam Thursday at home. Brotherton did the bulk of her damage in the first half, scoring all five GHS goals.

It didn't take Brotherton long to put up Greencastle's first goals of the night. She scored first at 37:27 and again at 36:54 after powering an angled shot through North Putnam keeper Jaclyn Roush.

North Putnam got its first goal in the first half when Cayla Kientz blasted a shot past GHS keeper Melody White with 21:55 on the clock.

Brotherton went on another scoring spurt, netting goals at 19:52 and 11:46 on the clock to give Greencastle a 4-1 lead.

As time was winding down in the first half, North Putnam's Maggie Pinney handled the ball and took aim from a distance that seemed to be asking for trouble. The result was anything but.

Pinney's powerful right foot connected with the ball, sending a high arching shot over the defense and over the head of White to score the Cougars' second and final goal of the contest with 1:21 before the half.

But again, it was Brotherton who ended the half with a score.

With :37 remaining, Brotherton had the opportunity for a penalty kick. She blasted a shot to Roush who deflected the ball, but a momentary hesitation following the save gave Brotherton a chance to take aim and rocket the rebound into the back of the net for Greencastle's fifth goal of the half. The Tiger Cubs entered the break with a 5-2 lead.

After falling to Tri-West two days earlier, Greencastle head coach Curt Bingman said his girls were ready to prove themselves.

"The girls were fired up after that last game," he said. "They put their hearts and soul into it yesterday, didn't give up in practice yesterday. Most of them were sore and tired after the 7-1 loss to Tri-West, but this being a county rival school, the girls were fired up all day and ready to go. Even pulling girls out, they didn't want to stop.

"Once again, my girls fought through and didn't give up. I'm proud of them. It's only game two and we've got a big long season ahead of us, so we'll see what the future holds," Bingman said.

Greencastle added two more goals in the second half -- one by Brotherton and another by Katie Farris.

The second goal came with 17:02 on the clock, when a pass to the middle to a big hop and Farris jump and directed her kick across the body of Roush for the goal. The score brought the game to its final score of 7-2 in favor of GHS.

For North Putnam head coach Willie Gaskin, Thursday marked the beginning to the season and showed him what his team needs to focus on.

"It was the first game of the season, so you don't know what to expect when you step out there," Gaskins said. "The biggest thing is since I've lost four veterans last year, that was a pretty good chunk of the team, so filling in those rolls with much, much younger players -- mostly freshmen. It's their first taste of a varsity soccer game, so now they know what to expect for the oncoming games.

"They did what I asked them to even in the heat," he added.