'Who Loves Their Dixie Chopper' turns into special ops mission 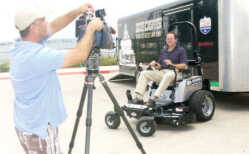 Smiling aboard his new Magnum mower, Tom Sands gets ready for his close-up with the Dallas CBS TV camera rolling. Courtesy photo

But Sands is also devoted to the black and silver of Dixie Chopper, the Putnam County-based lawn mower manufacturer that is celebrating its 30th anniversary in 2010. In fact, Sands loves his Dixie Chopper mower so much that the last thing he did before heading to Iraq earlier this year was mow his grass -- even though he had already used his Silver Eagle on it the day before.

"He mowed one more time," wife Jennifer Sands said in a video submitted for the "Who Loves Their Dixie Chopper" contest, "and then he washed it, he waxed it and he put it away. He loves his Dixie Chopper."

While Sands was in Iraq serving as a private contractor this spring, his wife and daughters Nicole, 9, and Brooke, 13, created the video and secretly submitted it to Dixie Chopper for the YouTube contest.

The Sands' video creation was an overwhelming winner in the "Who Loves Their Dixie Chopper" contest. And on Aug. 11, Dixie Chopper Marketing Manager Kraig Richmond and Communications and Public Relations Director Eric Bernsee flew to Texas to surprise Lt. Col. Sands with his prize -- a new 2010 Dixie Chopper Magnum mower. They were joined by Dixie Chopper Territory Manager Lance Wheeler and Mike Shanks of Mike's Motor Toys in Rockwall, the local Dixie Chopper dealer.

"You made my day," the stoic Sands said after a surprise ceremony to present the mower.

"They made your year," wife Jennifer quickly corrected.

The 47-year-old Sands, a USAF veteran of the Afghanistan war, was in between stints in Iraq when the mower was presented. He was headed back to the Mideast later in August. A veteran of 20 years in Air Force special ops, Sands is not usually so easily fooled.

"It's not often you can fool a special ops expert," Dixie TM Wheeler smiled.

Sands is a fitting winner for Dixie Chopper, which is currently paying homage to Armed Forces personnel past and present with a "Hometown Heroes" rebate program on a new mower purchase.

"While this contest was open to anyone who wanted to share why they love their Dixie Chopper mower, having a veteran Air Force officer chosen as the winner is truly an extension of our 'Hometown Heroes' program," Dixie Chopper President and CEO Gary A. Morgan noted. "We couldn't be happier and more proud and excited than to be associated with another individual who has helped keep our country and our communities safe places to live and work."

Undoubtedly, Sands will have to make some room in his garage, where he already parks his Silver Eagle atop its own blanket that is duct-taped to the cement floor.

"He loves his Dixie Chopper so much and is so contagious about it," wife Jennifer continues, "that he has even convinced other people in the neighborhood to buy Dixie Choppers."

Even visitors to the Sands' home get the Dixie Chopper treatment. Everyone gets his or her picture taken aboard the shiny zero-turn mower, including relatives like Aunt Hilda visiting from Germany. Dixie Chopper's Kraig Richmond added his name to that list during the visit.

As she spoke on camera about her husband's devotion to the Dixie Chopper brand, wife Jennifer was wearing a white blouse with "Dixie" stitched around the front of the collar. So loyal is her husband to Dixie Chopper that when Jennifer and Tom attended a party in costume -- she went as Dixie, and he as Chopper.

"So everywhere we go, everyone knows how much he loves his Dixie Chopper," Jennifer concluded.

Links to the winning videos are: