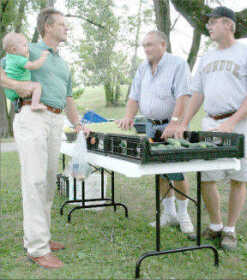 Todd Masten carries 7-month-old son Jerry Stewart Masten after buying garlic and peppers from William Boyette (left) and Brent Masten at the farmers market at Robe-Ann Park Tuesday. The last farmers market at the park for the season will be Aug. 24 but will continue Saturdays at the downtown square along Franklin Street in Greencastle until October. Banner Graphic/AMANDA JUNK

Bob Zaring has been a farmer in Fillmore for around 15 years following in the family tradition of more than 20 years of farming pumpkins and winter squash.

At the farmers' market in downtown Greencastle he sets up shop in the same spot at around 6:15 a.m. every Saturday, and patrons can expect to buy his regular stock of tomatoes, potatoes, green beans, sweet corn, eggplant and hot peppers, among others.

"People look for you every week," he said.

In support of keeping produce local, Zaring supplies produce to two restaurants in town, including Chief's, and three fraternities and sororities at DePauw University.

Zaring is also one of the 25 percent of farmers' market vendors nationally who say the market is their sole source of income, according to a survey conducted by the United States Department of Agriculture in 2005.

The same survey also found that local farmers' markets take in more than $1 billion annually, with much thanks to a sharp increase in the number of markets sprouting up across the country.

The increase in markets nationally can be felt locally as well, as Friends of the Farmers' Market Chair and Greencastle Civic League President Catherine Ensley said she has a list of around 60 vendors who have expressed an interest in setting up shop at the market on the square along Franklin Street each week, up 20 from last year.

"The farmers' market is a celebration of what is truly wonderful in our community and county," she said. "We have beautiful handmade things and delicious food."

Part of that increase can be felt through the creation of Sustainability Commission in late 2009, when more than 100 citizens met to develop environmental solutions to strengthen the economy, culture and quality of life of Greencastle; the growth of the farmers' market was one of the first outcomes of The Sustainable Greencastle Report toward reaching that goal.

Since the market was sponsored by the Friends of the Farmers Market, the market has expanded, and some vendors have experienced a 300 percent increase in revenues -- one of several points highlighted in the reasons why Greencastle was one of two Hoosier cities nominated for a National League of Cities award, Sustainability commission chairman Steve Setchell said.

"The farmers market, like several sustainability initiatives in the community, work so well because they make so much sense," he said. "The produce is really superior in terms of value and freshness."

Farmers markets are also beneficial to the local economy, Setchell said, especially as vendors start competing against each other to lower prices.

"This is what you find in big box stores and is one of the best things you can do to support the local economy," he said. "Why would you shop anywhere else?"

While the Saturday market has gained momentum, the fate of the Tuesday market held each week at Robe-Ann Park in conjunction with Parkfest is still in question, Ensley said.

The Tuesday market, the last of which this summer will be held Aug. 24 from 5 to 8 p.m., developed in response to a survey of vendors and patrons who expressed there was a need and an interest in having two markets in Greencastle each week, she said.

But with an average of three or four vendors each week, Ensley said she is not sure whether the Tuesday market will continue next summer.

"It didn't take off like we've hoped," she said. "It either poured down rain or was too hot (on Tuesdays)."

Farmers' market culture has also picked up from 8 a.m. to noon Saturdays in Cloverdale at its lot off the corner of Logan and Lafayette streets in Cloverdale, market coordinator Judy Whitaker said.

That market has been at the same location for four years and averages seven vendors each week, while some weeks see between 12 and 15, she said.

Whitaker attributes the increase to the number of "buy local" supporters nationally.

"People know it's fresh, you can't say that about grocery stores where you don't know where (produce) has been or how long it's been there," she said. "They strike up relationships with vendors and particular varieties."

For more information about the farmers' market in Greencastle, contact meetatthemarket@gmail.com or 653-1737.

Contact Judy Whitaker at 795-6211 to learn more about the Cloverdale Farmers' Market.

To see a video of some farmers' market highlights, check out bannergraphic.com Sunday.