By MATT WILSON, For the Banner Graphic 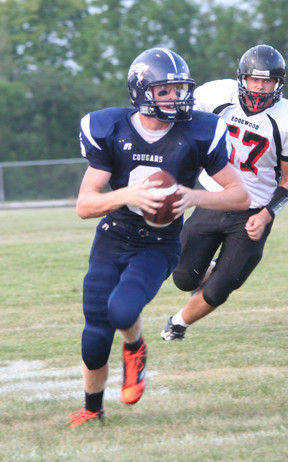 NEW MARKET -- Friday's football game against Southmont meant a lot to all the North Putnam football players, but it probably meant the most to senior Jordan Murphy.

Murphy suffered a season-ending MCL and meniscus injury in last year's 28-13 loss to the Mounties. Murphy showed he was healed from that injury Friday night, rushing for 101 yards and scoring two touchdowns in the Class 2A, No. 4-ranked Cougars' 35-14 victory over the Mounties at New Market.

"He was really looking forward to this game," said North Putnam coach Greg Barrett, whose Cougars improved to 2-0 and denied Southmont its first 2-0 start since 2003. "He just saw this game as a chance to redeem himself from what happened last year. It's two games and he's still healthy."

"We just got outplayed and outcoached," Southmont coach Desson Hannum said. "This is a hard loss to swallow because we made a lot of mistakes, especially in the first half."

Hannum was disappointed in the Mounties' eight penalties for 65 yards. He said many of those penalties came at crucial times.

With North Putnam ahead 14-0 late in the second quarter, the Cougars were faced with a 3rd-and-7 from the Mountie 29-yard line when Everts threw an incomplete pass. The Mounties, however, were called for pass interference, giving the Cougars an automatic first down at the 14-yard line.

"We missed some assignments and we had a lot of penalties, and those penalties came at crucial times," Hannum said. "We just have to get back to playing the right way."

The start of the game also didn't help the Mounties.

North Putnam needed just two plays to reach the end zone, as Everts hit Murphy for a 21-yard completion, then Everts ran for a 33-yard touchdown.

"We had a great start to the game," Barrett said. "On the first play, we kind of took advantage of Southmont coming up on the corners and we called for a play action slant and go and Kolten just made a great throw."

Southmont got within 14-7 in a 14-play scoring drive to open the second half. Quarterback Austin Burton capped the drive on a 1-yard run. North Putnam, however, broke the game open with two fourth-quarter touchdowns before Burton had a 53-yard touchdown run with three minutes remaining in the contest.

Micah Hatch led Southmont's rushing attack with 15 carries for 54 yards, while Burton had 13 carries for 48 yards.