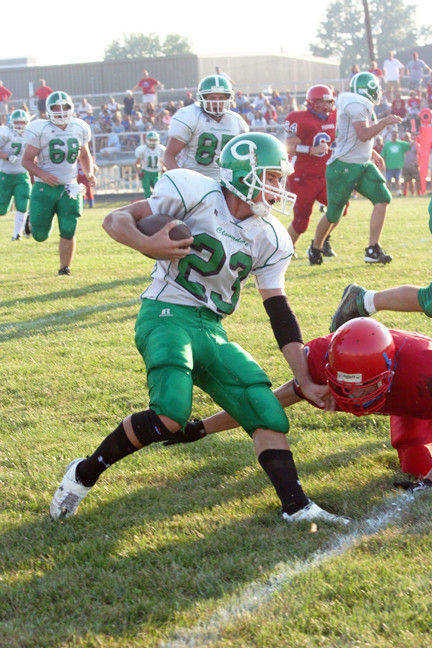 Unlike week one, where the bulk of their offense came from Donavan Scisney, the Clovers used a balanced attack to pick up their second straight win to open the season.

Turnovers were also a big factor as the Clovers turned Princeton's turnovers into a lot of early points.

"We started a little sluggish on offense, but the defense was solid," CHS head coach Kyle Winkler said. "We scored seven in first quarter with Scisney with 22 yard run. Then Princeton turn the ball over three or four times in second quarter and we racked up 40 points."

"We got the ball out to all our skilled guys on sweeps and pass plays. Brinkman, Couse and Scisney had several broken tackles on the way to touchdown scores. The third quarter had several long runs to get the score to 67" Winkler said.

Winkler also commended his freshman squad who took over in the fourth quarter and played solid football on offense and defense.

Up next for the Clovers will be the Monrovia Bulldogs, a team who beat up on the Clovers in 2009, but now it's 2010 and the Clovers have a whole new attitude.

"Overall, we had a solid night on defense with sacks, interceptions and forcing turnovers," Winkler said. "The offense is starting to gel. We will still have to have a solid game plan for the bulldogs for game three. The players are very confident that we will compete against the conference champs from 2009."

Cloverdale will travel to Monrovia next Friday at 7 p.m.