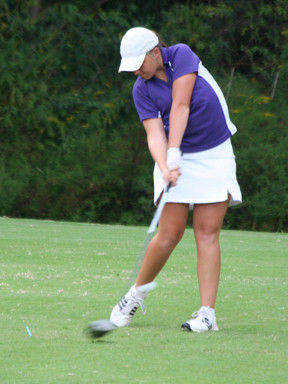 Greencastle's Katie Hedge connects on a big drive during Wednesday's match against Cloverdale and Monrovia.

CLOVERDALE -- With temperatures dropping and storm clouds rolling in, Clover Meadows remained dry and Greencastle finished at the head of the pack Wednesday. GHS finished first with a 209, with Cloverdale edging Monrovia 225-226.

Greencastle golfers Katie Hedge and Chelsea Samuels battled for medalist honors, with Hedge getting the nod after posting a score of 42 to Samuels' 43. Kay Wood shot a 56 for Greencastle and McKenzie St. Marie shot a 68.

Head coach Brad Kingma likes what he saw from his top two golfers on the night.

"We can get consistent scores out of Katie and Chelsea like that," he said. "They're developing good competition between the two of them, so that's pretty good. They still have some things they have to clean up, particularly around the green. They're not capitalizing -- too many three putts, too many chips and two putts -- they need to start getting birdies and pars instead of pars and bogies."

He also noted that Wood has picked up her game and is going some nice things as well.

"Kay's is really playing well, so to come in with another mid-50s, if she can maintain that consistently, I know she's got a goal of wanting to get that one score under 50, if that comes that will be great. She's really starting to develop well and really swing well," Kingma said.

For the Clovers, Victoria Boyette shot a 47 to lead the team with Sydney Shrum adding a 48. Cedar Woodworth shot a 56 and MaKayla Moore shot a 74.

The Clovers were trailing Monrovia by six strokes while waiting for the No. 3 golfers to come in with their scores. Woodworth edged Monrovia's Erin Hayes by seven strokes to give the Clovers the win.

"I think the big thing for us tonight (Wednesday) was Cedar," CHS head coach Ken Williams said. "Cedar's 56 is a career best and that's where we need her -- around 55. Sydney was off tonight, but she's been so consistent in the low 40s, she's entitled to an off night. She has a couple bad holes and I was really curious to see how she recovered after that."

Shrum was up and down on her final four holes, but Williams noted it wasn't as bad as it could be.

"I'm glad it's not four bad holes in a row. That's what we were seeing early in the season was once we had a bad hole, we had four of them in a row. She's improving in that regard and was a little bit off on her score," he said.

Williams acknowledged the play of Boyette and Moore as well and is looking for some good things out of Moore by seasons end.

"Victoria, I think, has been under 50 four out of the last five matches, so she's beginning to settle in where she needs to be," Williams said. "She'd like to be lower than that. I think it's possible, but we're inching toward it I guess.

"MaKayla got some experience tonight. We haven't played non-circles very often, only the last two nights," he continued. "That hurts our beginners sometimes because they get in a mess every once in a while and post a 12 or a 15 and the next thing you know, your 75 isn't going to be there anymore.

"She posted a 74 tonight and that's considerably better than last night when she had an 82 and probably on a tougher course overall. She's working at it and that's all I'm asking of her," Williams said.

He said Moore is a good athlete and has the potential to become a good golfer.