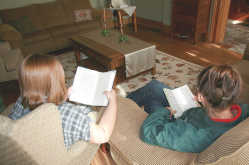 Two ResCare group home residents sit together reading at ResCare's Miller-Jones House recently. ResCare's main campus opened in 1995, took in its first child in 1996 and was originally used as a girl's group home. The Miller-Jones group home opened in 2005 and was also used for girls. Banner Graphic/JAMIE BARRAND

Editor's note: To protect their identities, the names of the ResCare residents in this story have been changed.

GREENCASTLE -- There may only be nine young women living at ResCare's Miller-Jones House, a group home for girls, but there are hundreds of stories within the home's walls.

One of those stories is Kristy's.

Although she is only 15 years old, Kristy speaks with a clarity and maturity far beyond her years.

And the reason she does is probably because she has been forced to grow up so quickly.

Kristy was sent to ResCare from Newton County after running away from home.

"I've been here for 85 days," she said matter-of-factly. "I ran away because I was having issues with my mom."

Those issues -- which were rooted in her mother's methamphetamine abuse and subsequent abusive behavior -- led to the state pressing charges against Kristy's mother.

Looking demure in a grey, black and white plaid dress, Kristy was waiting to go to court to testify against her mother.

"She used meth and pills," Kristy said. "The drugs made her abuse me."

The physical abuse, Kristy said, was a "one-time thing." After authorities became involved, Kristy said, her mother convinced her to run away rather than risk being put into a foster home.

"My mom's a manipulator," she said. "We became close through drugs and negative behavior."

Once she was picked up as a runaway, the court ordered Kristy to be placed at ResCare.

"I was scared," she admitted. "I'd heard rumors about girls beating each other up in placement."

As it turned out, Kristy ended up making friends -- and enjoying the experience of finally being taken care of instead of being the one to do the care giving.

"I got to go shopping," she said with a smile, running her hands over the skirt of her dress. "I never got to do that before. This dress ... it's mine. I've gotten to play laser tag and go camping ... all sorts of things I've never done before."

Being in counseling, Kristy said, has shed light on what needs to happen if she is to stay off drugs and have any sort of relationship with her mother.

Kristy's mother also has five other children with four men -- none of whom are Kristy's biological father.

"I don't even know who my dad is," Kristy said.

Kristy's half-siblings -- two brothers and three sisters -- range in age from 8 months to 14 years. As her mother's drug use escalated, Kristy became a sort of surrogate parents to her younger siblings.

And now, separated from them, she worries about them.

"I worry all the time," she said. "They're all still in the house with my mother."

Kristy said although she can't be certain her mother is still using drugs, she believes she is.

"My brother tells me she still leaves the house for a long time," she said. "It's upsets me and it makes me not want to spend time with her. She doesn't think she has a problem ... she thinks she's fine the way she is."

But Kristy is focused on getting her life on track.

"I feel safer here," she said. "I know this is a better place to be than a girl's school or the DOC."

Kristy said her drug experimentation has been limited to marijuana.

"I take drug classes," she said. "I have a lot of inspiration not to do drugs. That could only lead me downhill to where my mother is."

If only for her siblings, Kristy does hope to be reunited with her family after she completes her time at ResCare.

"That's the only family I have," she said.

School has become a focus for Kristy. While she was failing classes in Newton County, at ResCare's Joanne Collins School, she is making A's and B's.

Kristy's aspirations include a career in education.

"I want to teach preschool or elementary school, then work my way up to being a principal," she said.

Seventeen-year-old Morgan came to ResCare from Dearborn County. She has been a ResCare resident since April 1, and expects to be discharged in late November.

In addition to being a runaway, Morgan has had substance abuse issues. Most recently she was hooked on heroin, and prior to that had problems with other opiates.

This past spring, Morgan ran away from her home in Dearborn County. Her destination was Kentucky.

"I have friends there," she said.

She was picked up, and stayed in a DOC juvenile facility from February until April.

"I had to stay there because I failed the drug screen," she said. "I tested positive for opiates and weed."

Being sober has been a struggle for Morgan, but is something she feels has been worth it.

"I feel like I can think through more clearly and make better decisions," she said.

Currently, Morgan attends group meetings for individuals with chemical dependency. Once she leaves ResCare, she will participate in a relapse prevention program.

"With the way everything's going right now in my life, I feel like I'm going to be able to stay sober," she said.

When she is discharged from ResCare, Morgan plans to move in with her paternal grandparents in Ohio.

Morgan's parents split up when she was 4 months old. She has never had a relationship with her mother, and she no longer has -- or wants -- one with her father.

Morgan spent most of her childhood with her grandparents, but moved in with her father her freshman year of high school.

"He made it sound like a big party," she said.

And for a while, it was.

"He would start drinking as soon as he got up in the morning," she said.

Then the truth revealed itself.

"He didn't want to pay child support for me," Morgan said. "I ended up being a babysitter."

Her rough relationships with her parents made Morgan standoffish.

"I have a real problem with trusting people," she said.

But at ResCare, that has changed for Morgan.

"When I first got here, I wasn't sure of things," she said. "But now it's kind of like our own little family. We go to Fever and Pacers games. We've been to Chicago to the museum. We do a lot of fun things."

She is also helpful to new girls at the home.

Morgan plans on taking her general equivalency diploma test this month. After that, she said, she would like to take classes at Miami University in Ohio, and eventually work for a child services department.

"I'm really excited," she said. "I'm ready to go home, to go back to my grandma and grandpa's. I'll keep going to therapy, and I've built my support system. I know if I have any doubts or troubles, I can turn to them."

Alison Dobbs is the case counselor for all the young women at ResCare. She acts as their therapist, while also helping them through paperwork and court hearings and assisting them with job searches.

"A lot of times the girls do extremely well in the program, but then they get put back in the same family environment or they run into peer pressure," Dobbs said.

What she tries to help the young women with is realizing what their own responsibilities will be with regard to the directions their lives will take.

"The parents, a lot of times, aren't going to change," Dobbs said. "That lifestyle's been normal to them for how long? They don't know any other way to parent."

One of the most frustrating aspects of her job, Dobbs said, is putting children back in home environments she knows are not healthy.

"I don't think anyone could come in here and not get attached to these girls," she said. "All I can do is know I've put 110 percent into them and hope we've given them the skills to make it."

Most of the girls at ResCare are there as a result of court orders.

"We recommend they stay six to nine months, but some of them end up here longer," Dobbs said. "When we recommend they stay longer they're usually bummed, but I've never had anyone fight with me about it. I think they realize it when they're not finished and they have more things to work out."

ResCare's main campus was opened in 1995 and took in its first child in 1996. In May of 2002 the LaViolette home was opened across the street. This home was originally used as a girl's group home.

In 2005 the Miller-Jones group home was opened and was also used for girls. Shortly after opening Miller-Jones, it was decided to transition the LaViolette group home into a home for younger boys, primarily 6-12 years old.

In 2006 Anderson Woods was opened in Vermillion County and is home to 15 teenage boys.

In 2008 the Challenger group home opened. This home is on Ballard Lane across from the airport and is used as an honors and independent living program for older teenage boys.