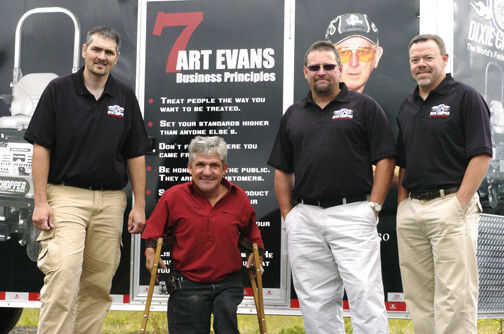 HILLSBORO, Ore. -- One of Dixie Chopper's biggest fans is one of the world's most famous "Little People."

Matt Roloff, patriarch of the Roloff family of "Little People Big World" and a giant in the world of reality TV, is now the proud owner of a 2011 Dixie Chopper Silver Eagle 2760HP. The lawn mower is being incorporated into the TLC (The Learning Channel) reality TV series this fall.

A half-hour episode of "Little People, Big World" featuring Roloff's acquisition of the Dixie Chopper mower is scheduled to air at 8 p.m. Nov. 15 on TLC. The episode is titled "Take a Hike."

Matt, who spent much of his childhood in the hospital and walks with the aid of crutches, previously forged a career in computer software sales but had been laid off before the TV series debuted in March 2006.

He became acquainted with Dixie Chopper mowers because of his association with the local New Holland farm equipment dealer, who has provided machinery used at the Roloff farm. The Portland area dealer also handles Dixie Chopper mowers, and it was there that Roloff became infatuated with "The World's Fastest Lawn Mower." Matt wasted no time incorporating the mower into the operation of Roloff Farms, where it is being used constantly by the family and their staff.

How did this all come about?

"Actually, Matt Roloff himself called last April to say he was interested in getting a Dixie Chopper mower to use on the show," Dixie Chopper Communications and Public Relations Director Eric Bernsee explained. "Interestingly enough, as we were discussing the possibilities, he was walking into NBC studios in Hollywood to go on 'The Tonight Show' with Jay Leno and talk about the new season."

Agreeing to provide a mower was the easy part. Getting it to the far Northwest was another story.

Dixie Chopper Marketing Manager Kraig Richmond, Territory Manager Tom Metz and Marketing Assistant Bryon Hurst delivered the Silver Eagle 2760HP to Roloff this past summer. By truck and trailer, they endured a 5,000-mile round trip from company headquarters in central Indiana to the Portland area to ensure Roloff would receive the newest model with the latest safety features (i.e., new rollbar and retractable aircraft-style seatbelt).

Richmond, Metz and Hurst gave Roloff a quick lesson in operating the Silver Eagle mower and watched him literally ride off into the sunset on his new Dixie Chopper.

Despite his small stature, Roloff is able to operate the zero-turn mower without any modifications to it. Although his feet don't come close to reaching the floorpan, it doesn't matter. Steering, acceleration and braking are all done with the hand levers.

The scheduled appearance on "Little People, Big World" isn't Dixie Chopper's first national TV exposure. In 1993, the Dixie Chopper Jet Mower was famously featured in the season finale of the Tim Allen sitcom "Home Improvement," while a two-part episode of "American Chopper" in 2004 detailed the building of the Dixie Bike motorcycle by the Orange County Choppers gang.

Meanwhile, at least six times in recent years, a Dixie Chopper mower has been part of a prize package or showcase showdown on "The Price is Right."

Dixie Chopper, which is celebrating its 30th anniversary in 2010, is headquartered in Fillmore.