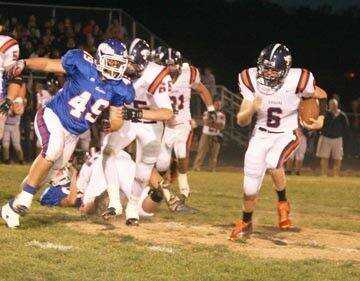 North Putnam quarterback Kolton Everts (6) runs past a South Putnam defender in Friday's sectional contest. Everts rushed for 25 yards and threw for 65 yards and a touchdown.

GREENCASTLE -- Over the last month, it was hard to find a team hotter than South Putnam. After falling to 2-3 following a 21-20 loss to Greencastle on Sept. 17, the Eagles ran off four straight wins, including impressive performances against Triton Central and Monrovia.

Unfortunately for the Eagles (6-4), may have run into the hottest team in west-central Indiana Friday -- the undefeated North Putnam Cougars.

North Putnam (10-0) used a hot start and a punishing defense to shut the Eagles out for much of the game, ultimately winning 40-7 to advance to the second round of IHSAA Sectional 30.

The resurgence of South Putnam's season is due in large part to its switch to a wishbone offense. North countered this on Friday with a 4-4 defense that punished Eagle ball carriers all night.

"All year we've talked about the three 'P's' of defense: penetrate, pursue and punish. I thought we've done a nice job of that -- playing nasty and classy," Cougar coach Greg Barrett said. "That's kind of been the staple of our team this year. Our defense has been coming out and taking care of business and setting us up in good field position."

The Cougar defensive unit held the Eagle rushing attack to 144 yards on 41 carries.

"That's a group of guys who have played together for a long time," Barrett said of his defensive unit. "They're on a mission and hopefully we can keep this thing going."

The Cougar runners, by contrast, picked up yards in bunches. Travis Franklin needed just two carries to go 50 yards for the game's opening score. He finished the night with 6 carries for 102 yards and two scores, along with 2 catches for 58 yards and another score.

Not to be outdone, workhorse Hank Spencer had 11 carries for 91 yards and three touchdowns.

"Everybody knows what we're going to do," Barrett said. "You watch film on us, and you know what plays we're going to run on you. We're just going to keep doing what we're doing -- make sure we're making the blocks and just working hard at it."

Knowing what the Cougars do, Eagle coach Troy Burgess tried to open the game with a surprise. Rather than kicking deep, they tried an onside kick, which the Cougars quickly swallowed up.

While it may have seemed like an early desperation move to some, to Burgess, it was a measured risk.

"But you gotta role the dice when you play a team as good as they are," he added. "We worked on it and thought it was something we could maybe get on them."

Unfortunately for Burgess, he was outguessed by Barrett.

"We thought the onside kick was going to be there, and it was there. We did a good job covering it," Barrett said.

As good as the wishbone has been for the Eagles in recent weeks, it met its match, not only in the Cougar defense, but in the very nature of the offense. Giving up 21 first-quarter points defensively put the Eagle offense in a bad position.

With the Eagle rushing attack sputtering for much of the night, the lone bright spot was senior Robbie Gibson, who was able to get in open space several times and use his speed. The tailback had 15 carries for 88 yards and four catches for 58 yards.

His classmate, fullback Brayden Freeman, scored the Eagles lone touchdown -- a 5-yard scamper on the final carry of his high school career.

Burgess gave credit to all his seniors -- Gibson, Freeman, Grant Zimmerman, Devan Buis, Scott Daniels, Corey Stanton, Dean Varvel, Jake Gould, Thomas Butts, Seth Arnold, Tyler Williams, Travis Stanifer, Patrick Allen and Adam Zigler -- for the success of the season. They took over for a great senior class from last year, they turned around a rocky start, and they set a school record for regular season wins over a two-year span with 13.

"I am extremely proud of this group. At one point, we're 2-3, and we finish this thing up 6-4. That is a credit to this senior class and the underclassmen," Burgess said. "I wouldn't trade this football team for anything."

At day's end, though, he simply tipped his cap to the other sideline.

"My hat goes off to Greg and his guys. They do a great job. It's a good football team," Burgess said. "We did what we thought we could do, and they did a better job than we did."

From the visiting sideline, Barrett had similar thoughts on Burgess and staff.

"Troy Burgess and that staff at South Putnam do a great job," Barrett said. "We respect those guys tremendously. It's a great rival between the two of us. We're pretty good friends, and I really like what he does -- he's a class act."

With his team remaining undefeated and moving to the second round, Barrett knows his players need to keep doing what they've done since August -- work hard and keep getting better.

"These guys have been putting the time in," he said. "I'm very proud of the way a lot of these guys played tonight. Our offensive line's blocking well. We've got some backs who are running the ball hard."

The Cougars face another familiar foe next week in Monrovia. The Bulldogs (5-5) defeated Tri-West 17-14 on Friday to set up a rematch of last year's sectional final.

The Bulldogs narrowly defeated the Cougars twice last year on their way to a 14-1 record and a Class 2A runner-up performance. North defeated Monrovia 33-0 on Oct. 1 and would be happy to hand the Bulldogs another loss.

However, if Barrett and his team have revenge on their mind, the coach is playing it close to the vest.

"That's a good ballclub, there's no doubt about that," he said. "We'll prepare to take away the things that they do. We know they're going to run the ball, so we'll have another good, hard week of practice working on these things."

At the same time, the coach knows what's likely on his kids' mind going into the matchup.

"These guys are excited; you know they're ready for that."

Next game: North Putnam hosts Monrovia at 7 p.m. next Friday.