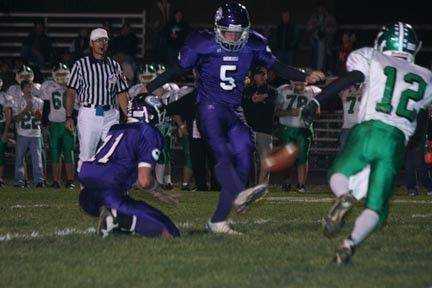 GREENCASTLE -- Suspense is the quality that makes any athletic contest something special. When the crowd holds its collective breath, with one play deciding the outcome of a game. With: 21.8 seconds left in Friday's game, there was certainly not much breathing going on at Greencastle's Harbison Stadium.

With mere seconds on the clock, GHS senior kick strode onto the field to attempt a field goal to give his team the win and keep them alive in the 2010 football sectional. Following a Cloverdale timeout, Parker did just that.

When asked how much of an asset it was to have a big-footed kicker standing on his sideline, GHS head coach Eric Davis said it was certainly a comfort.

"It worked out in our favor and it's real nice to have Kyle. Kyle has been -- we probably should have used him more and Kyle certainly has a nice leg and it's refreshing. It's a safety net of sorts to have a nice kicker," Davis said.

The Tiger Cubs got the win, but not before Cloverdale turned the tables on them. In the first half, Cloverdale struggled with fumbles, but it was Greencastle's turn in the second half.

Its first four possessions of the second half ended in lost fumbles, which Cloverdale quickly turned into 24 unanswered points to take a 24-17 advantage in the fourth quarter. Davis chalked it up to some of his kids feeling the excitement of sectional and trying to do too much.

Cloverdale runner Donavan Scisney scored twice, with quarterback Jordan Brinkman rushing for a score and passing for another to give the Clovers their seven-point cushion. As soon as the Clovers looked to be in control of their destiny, GHS regained control and marched down the field.

With 3:16 remaining in the game, Greencastle was facing a fourth-and-goal from the nine-yard line. Tanner Battin's pass to Keegan Remsburg was knocked away, but a slew of yellow flags were thrown and the Clovers were cited for pass interference. One play later, Jesse Vermillion bulldozed in from one-yard out to knot the game at 24-all.

While Parker will be remembered for Friday's big game-winning field goal, it was a play on the Clovers previous drive that might be the play of the game.

Scisney took the Parker kickoff and began rocketing down the Cloverdale sideline. He had passed most of the GHS special teams players, but one person stood between him and a score. Parker took an angle and slammed Scisney out of bounds to save an almost sure touchdown.

The ensuing Cloverdale drive stalled, giving GHS enough time to drive down field to give Parker a chance to win the game. In their final drive, the Tiger Cubs saw Battin and Remsburg connect twice and Vermillion power his way for an 11-yard gain to get GHS in field goal position.

"That second or third drive on the west end -- the penalties and then we have to kick a field goal, but we hit the field goal. We don't like the penalties, but we were able to at least move the ball down into field goal range, which is a positive. I think getting an attempt before this last one was huge for Kyle. There were some positives there," Davis said.

Greencastle got things going when Remsburg faked a reverse on a punt and took it 70 yards for a score with 4:36 in the first quarter. Following a Cloverdale fumble, Mac Shuee scored with no time remaining in the first quarter to give GHS a 14-0 edge. A 24-yard field goal from Parker had the Tiger Cubs going into the half with a 17-0 lead.

Cloverdale head coach Kyle Winkler said after putting up no points and struggling in the first half, he put it all on his seniors to right the ship.

"I said 'Hey men, the team who advances in the tournament is the team who turns the ball over the least amount or has no turnovers and has the least amount of penalties'", he said. "The slant pass in the endzone, we tried to take that away and the referees call it. We had the ball in excellent field position and the first play we get a holding call.

"Then we fight back and get turnovers from them in the second half and it was a hard-fought game. Down the stretch, we had too many inexperienced players on the field come sectional week, too many injuries beleaguer us during the game. Our No. 1 receiver has to come out of the game and we have another kid who's playing with one hand, so he can't play defense. We were playing with our hands strapped behind our back most of the time," he added.

He also said in previous years, the Clovers might have tucked tail and ran, but instead they fought and showed a new mentality to should serve them well in the future.

"You can't take anything away from this senior class," he said. "They fought hard. I laid it all on them at halftime. I said 'It's going to be up to you to get these guys ready for the second half because I haven't fumbled the ball a single time out here. You guys know what you need to do'".

"Giving them 14 points to start off the game was just shooting ourselves in the foot," he continued. "But we came back. In years past, in my first year here, our kids would have tucked their tails and ran. That was the mentality and we fought every single day to get rid of that mentality and it showed up in the second half that we don't have that mentality. That's what I'm proud of."

Davis said when the going got tough in the third quarter, it was one of his seniors who took charge and led by example.

"I tell you what, the kid that really came over and said 'Hey, we need to get this fixed' was Keegan Remsburg and he made some big plays there to move the ball," Davis said. "So from that standpoint, that's the kind of leadership we need more kids to demonstrate. And they demonstrate it through execution and being able to persevere through adversity. So, that was a good thing.

"And responding in the fourth quarter was huge for us. But we can get ourselves into that situation in the third," he added.

Winkler was frustrated with the fact that his team is lacking in numbers and believes there are some who could contribute to the team if they would just come out.

"We have a lot of big kids walking the hallway, they just don't want to play. It kills me," he added.

Davis acknowledged his team's hard-fought win and also praised the team who took his team to the wire and gave everything they had.

"Hats off to Cloverdale. Their kids played very hard. Scisney is one heck of a football player. I was proud of their kids and it's nice to see kids come out and they get down and yet they respond. Hats off to them. They were definitely a worthy adversary this evening," he said.