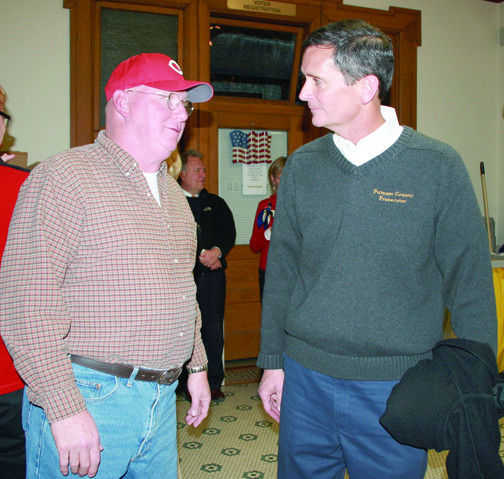 Bookwalter, the current prosecutor, was ahead in every district in the race. He eventually won 6,498-2,912, with 70 percent of the votes.

"I'm happy," Bookwalter said. "We try to do a good job, and I think the community spoke."

This will be Bookwalter's second full term as prosecutor. He served half of Mathew Headley's term, after Headley was elected as a circuit court judge. Bookwalter was then elected to a full term in 2006.

Perry said that he knew the race would be difficult from the beginning.

"We knew it was a long shot but it was a good experience and I'm glad I did it," Perry said.

Both candidates acknowledged that Bookwalter had an advantage in money spent on the election, though Perry estimated it at four-or-five-to-one, while Bookwalter was more conservative about the gap.

"We probably outspent him two to one," Bookwalter said.

Perry said he was happy that the votes he did get didn't play on party recognition.

Perry said that the strength of the Republican Party in this election was a factor in the outcome.

Bookwalter agreed that the strength of the Republican Party played a role in the outcome. He also discussed the role name recognition played in the election.

"In this community I don't think it's money, it's that they get to know you," Bookwalter said. "I think I probably had that ability over Bob, that people knew me better. You look at the numbers in Jefferson and Marion South and Warren, that's where I live, that's where my kids all went to school, and that counts in a small community."

Bookwalter said that he thought methamphetamine played a large role in how people perceived the race.

"I think the community were behind the meth issue, and I think meth was the big issue these last four years," Bookwalter said.

He also said that meth would be one of his focuses moving forward.

"There's a new meth that's called blue meth that we're really going to attack," Bookwalter said. "Meth is back on the rise and we've got to work on it."