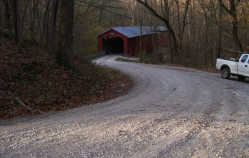 GREENCASTLE -- A troublesome stretch of CR 950N should cause county personnel fewer headaches this winter.

Putnam County Highway co-supervisor Jim Smith requested at Monday's commissioner's meeting that the department be given the discretion to close the road on either side of Pine Bluff Covered Bridge during snow and ice conditions.

The grade of the road makes it difficult for vehicles to climb the hill during winter weather. Smith said every winter some sort of vehicle gets stuck in the area, including both an LP truck and a pickup owned by North Putnam schools. He even said that the department's graders, which are six-wheel drive, have had trouble with the hill.

This stretch of road gets very little sunlight in the winter, so it takes much longer for any precipitation to melt. Additionally, Smith said salting a gravel road like this will only make it muddy.

Gates were already installed in the area this summer, and Dallas Trump, who lives nearby, has volunteered to close the gates and reopen them at the county's request.

The stretch of road between the gates is uninhabited, and commissioner Gene Beck said closing them would not cause a detour of more than a mile or so for anyone living in the area.