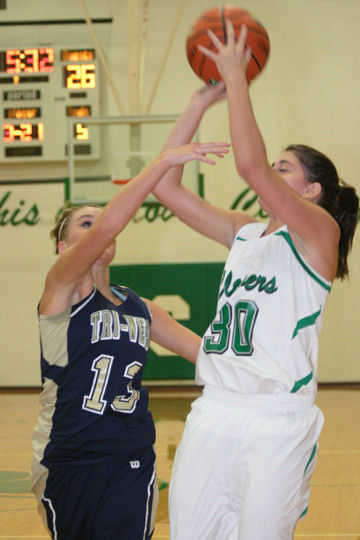 CLOVERDALE -- The Cloverdale Clovers opened its season against a top-15 ranked squad and showed how much they've improved even with some missing pieces. The Clovers lost to the Bruins 80-35.

"I would say that half of our turnovers were basically unforced when we were just panicking. We just can't get out of that panic state," he added.

Tri-West jumped out to the big first quarter lead of 23-12 behind a monster 15-point performance from Lauren DeSutter. The Bruins continued to build its lead throughout the second quarter and went into the half up 47-21.

Bristy Skiles led the Clovers in the first half with eight points, followed by Holly McCammon with seven.

The problem that plagued the Clovers in the first half was an inability to keep Tri-West of the offensive boards. The Cloverdale bench watched as multiple Bruin shots went up, hit the floor and then found other Bruin players to be put back in.

After a slow start to the second half, Cloverdale got a lift from its bench and played a stronger half of play.

The third quarter saw the Clovers shoot just 2-of-15 with two free throws, allowing the Bruins to extend its lead to 64-27 after three quarters.

Cloverdale closed the game with an eight-points quarter, falling to the Bruins 80-35.

Anderson said the keys to improving revolve around three things. He also acknowledged his team's improvement from a year ago.

"There were three things, I said we have to, when we get our hands on the ball, we got to hang on to it and we don't," Anderson said. "We let rebounds get away and passes go through our hands. Then we have to take care of the basketball and then we have to be able to be more patient on the offense. If we could do those three things we're already a better basketball team, now we could be a good basketball team. It was a lot more positive than the first game last year."