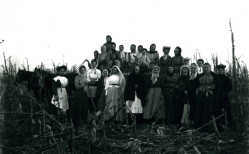 During construction of the Fillmore Christian Church building a century ago, members of the Ladies Aid Society gleaned corn from fields near the town. The money they raised was enough to purchase the stained glass windows that remain in the church to this day. Contributed photo

FILLMORE -- On Nov. 20, 1910, the congregation of the Fillmore Christian Church dedicated a new brick structure to serve as its permanent home. The entire project, including pews, a furnace and other interior items, cost $10,471.80.

Today the church still resides in the same building, with some modernization and modifications, at 102 N. Main St. Obviously $10,000 went a lot further in 1910.

Mary Harcourt, a congregation member who serves as the church's unofficial historian, said the current structure was built when the people "decided they wanted a more permanent structure."

However, the history of the Fillmore Christian Church goes back further than the century in the current building. Pioneer families started the church in 1839. After meeting in homes for a time, they built a log church north of Fillmore.

Twenty years later, it was time to upgrade, and the church built a new frame building at its current location. "The Old Union Church," as it was known, served for 50 years until the upgrade to the current building.

The cornerstone was laid on July 4, 1910, and the building was completed and dedicated in November. Over the last century, the church has celebrated its homecoming in November as a sort of anniversary celebration.

"Every year since the dedication of the building, we've celebrated a harvest dinner or a homecoming around this time," Harcourt said. 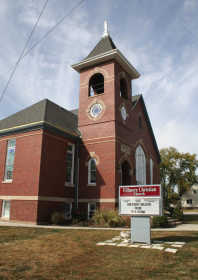 While changes have taken place at the Fillmore Christian Church over the years, it remains much the same building it has been for its 100 years of existence. The congregation will celebrate the century of the brick structure on Sunday.

This year is no exception, but the celebration's focus will be more squarely on the church building and its 100th anniversary. The homecoming and anniversary celebration will take place Sunday at the church, with Sunday school at 9 a.m. and regular church service at 10 a.m.

The special festivities will begin with a pitch-in lunch at 11:30 a.m., followed by a special afternoon service at 1 p.m.

The homecoming will celebrate not only the current and past members of the church, but the building itself. Over the years, the building has undergone a number of changes.

In 1953, a south addition was added for Sunday school rooms. The addition was built as a gift to the church from Ora Day.

Day had also given a house to be used as a parsonage in memory of his wife Addie in 1951.

"Ora Day was a really good benefactor to the church," Harcourt said.

Other changes over the years have included the addition of a baptistery (another gift from Day) in 1965, the addition of an organ, an elevator in 1997, bathrooms in the basement in 2001 and a new sign in 2009.

Harcourt has been there through many of the changes and has been glad to be part of the church for so long.

"I've been a member here for over 50 years. I've seen a lot of changes in that time," Harcourt said. "It's been wonderful to have a church home for that long."

All who have called Fillmore CC their church home and anyone else interested can feel free to take part in Sunday's festivities of celebrating the church's rich history.