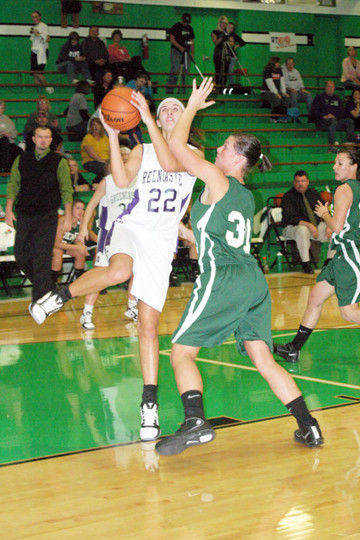 GHS senior Chelsea Samuels goes up for a tough shot against a West Vigo defender in Thursday's game.

The Tiger Cubs had three players score in double figures and one record double digit rebounds. Alyssa Nichols led the Tiger Cubs with 18 points, followed by Mallory Miller with 17 and Chelsea Samuels with 14 points. Taylor Pruitt snatched a game-high 15 rebounds.

GHS head coach Bradley Key was pleased with the effort he received from his starting point guard Thursday.

"Alyssa Nichols played outstanding," Key said. "Kind of what we hoped we would get out of her. Last year we didn't really see it like we thought we might. We saw it some this summer and it came full force tonight. Her and Mallory, they were pretty tough to defend. Alyssa did a great job getting the ball up the court to Mallory. Overall I thought we did pretty good."

He also praised Pruitt and was pleased with the effort from first-year starter Rayleigh Amis.

"Taylor did a great job rebounding. Rayleigh Amis I thought had a great game as well. Especially because she didn't really play any varsity last year and now she's starting. She did a good job," Key said.

Key noted Samuels had a nice game as well. In addition to her 14 points, Samuels had seven rebounds and four blocked shots in the contest.

Although the team opened the season with a 20-point blowout, Key saw some things his team needs to work on as the season progresses.

"West Vigo had a good little guard actually," Key said. "I saw some weaknesses in our defense. I think it was first game jitters, especially in the first quarter. We put some points on them in a hurry, but then we made some substitutions and we kind of struggled. That's truly inexperience. I think that's going to come with the year."

Key said he really liked how active his squad was on defense and pointed out that at times they were even a little too overactive. He said the team was able to push the ball up the floor well and got up a lot of shots.

The Tiger Cubs now will turn their focus on Terre Haute North. Key said it should be a pretty even playing field and wants to see if his team can settle down from its performance on Thursday. He also said he wasn't sure what Saturday had in store for the Tiger Cubs.

"I'm not real sure," he admitted. "We have Terre Haute North. I think it will be a good test. I think they're, compared to year's past, they're a little inexperienced. I think they have two girls sitting out as well. It should be a good test for us though. Kind of see where we stand and if we win that, who knows.

"I'd like to see how we, now that we got one game under our belt, I'd like to see us settle down a little bit. We were still a little helter skelter and not real sure where we were supposed to be at all the time," Key said.