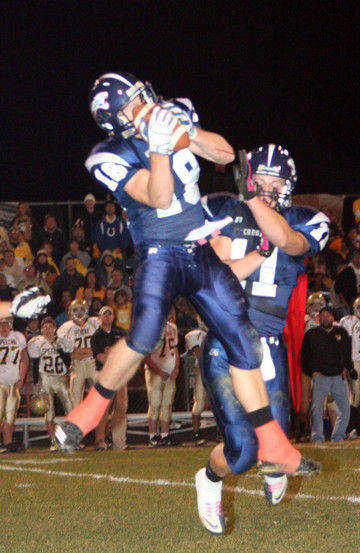 ROACHDALE -- With parking lot and stands full, and spectators two rows deep along the fence, the North Putnam Cougars captured the IHSAA regional football crown by knocking off Speedway 25-14. The game was one of high energy from both sidelines and intense action on the gridiron.

The Cougars held off a charging Speedway team who turned to the onside kick to get them into the game in the fourth quarter. They also rallied behind the arm of sophomore quarterback Austin Anglea.

Anglea tossed a 24-yard strike to Justin Brent just five seconds into the final stanza and it was his two big passes to Jonathan Jenkins and Brent on the next possession to set up the second Speedway score. However, the Cougars controlled the game from start to finish.

It was an exciting night and North Putnam head coach Greg Barrett was pleased with how his team overcame some adversity to win a big sectional game.

"(It was) too exciting there at the end," Barrett said. "I'm very proud of the way we played tonight and handled adversity that we knew was going to come to us. The key to us winning that game tonight was putting 25 points on the board and taking advantage of some good defensive stops and holding them out to not score any points.

"That's huge for us," he said of the defensive stands. "We knew they were going to come back and throw the ball on us. That quarterback (Anglea) was probably by far the best quarterback we've seen all year. He releases that ball well. I thought we got good pressure on him at times and the receivers are phenomenal. They make great catches and there's times we're all over them and their making great catches. It's just one of those deals and we're going to enjoy this win tonight and get ready for semi-state."

The Cougars got things going early as Hank Spencer streaked down the field for an 83-yard touchdown that was nullified due to a block in the back. But he traded in his 83-yard non-touchdown for an 87-yard jaunt to give North Putnam the only lead it would need at the 5:05 mark.

Then a botched snap led to Travis Franklin hitting Spencer in the endzone for the two-point conversion.

On the ensuing Speedway possession, Franklin picked off Anglea, his first of three on the night, stalling the Sparkplug offense.

North Putnam once again found the endzone just before the half as Kolton Everts tossed a pass to Caleb Vondersaar who tiptoed down the Cougars sideline for a 49-yard score, putting the Cougars up 15-0 at the half.

Interceptions played a big factor for the Cougars on Friday.

Anglea dropped back to pass and fired a shot that Vondersaar was waiting for. The senior zigzagged his way through the Speedway offense to set the Cougars up in nice scoring position just seven yards away from another score.

Two plays later, Travis Kratt leapt into the endzone from five-yards out to give the Cougars a commanding lead at 22-0. Senior kicker Cody Summerlot added a 32-yard field goal with 3:03 remaining in the third, putting the Cougars up 25-0 entering the final period.

Barrett said the Sparkplugs were able to adjust and take away some of North Putnam's options, but the team's depth was able to step up and make some big plays.

"We couldn't get our offense going the way we wanted to," Barrett said. "Our jet sweep wasn't working as good as we'd like, but the nice thing is we've got more guys we can plug in there. I thought Travis Kratt played well running the ball. Hank Spencer was a great first half running the ball. They made some good adjustments on defense and got some guys in there.

"The nice thing is offensively we do a lot of things and we were able to do some other things, whether it was the power game or the option or getting back to the edge on some toss sweeps. I'm very excited about how well we played and we're going to enjoy this victory and get ready for next week," he said.

The Cougars carried their 25-point lead into the final quarter, but it didn't take Speedway long to begin to chip away at it.

The Sparkplugs struck quickly, scoring only five seconds into the fourth quarter when Anglea hit Brent for a 24 yard score. After an onside kick, the Sparkplugs again scored on a two-yard punch from Mitchell Judkins with 8:36 remaining.

Following another successful onside kick from Speedway, North Putnam's defense stepped up and kept the Sparkplugs from scoring. The Sparkplugs had one final chance at making a run at the Cougars, but Vondersaar snatched his first interception of the day. Anglea threw four picks in the game Friday.

The Cougars were able to run out the clock and advance to next week's semi-state.

Spencer led the Cougars with 129 yards on 10 carries with a touchdown. Everts added 66 yards passing with a touchdown. Nate Bryan led the defense with 10 tackles, while Tyler Watson added eight and Jake Worth added seven.

North Putnam was able to play composed and within itself Friday and an emotion Barrett couldn't hide the pride he felt about his squad following its huge win.

"It's huge and it comes with focus," he said about the team's composure. "We were focused and we've been focused from day one last year when we got beat in the tournament -- and I'm not lying when I say that. These guys have worked extremely hard in the weight room, the classroom and the community and I'm proud of them."

North Putnam will host the winner of the Evansville Mater Dei/Brownstown Central game, which takes place today at 11 a.m.