CRAWFORDSVILLE -- It was a long, cold day at Wabash College for the DePauw faithful on Saturday.

The Tigers surrendered 498 yards of total offense to arch rival Wabash, while managing just 95 yards of their own, ultimately falling 47-0. 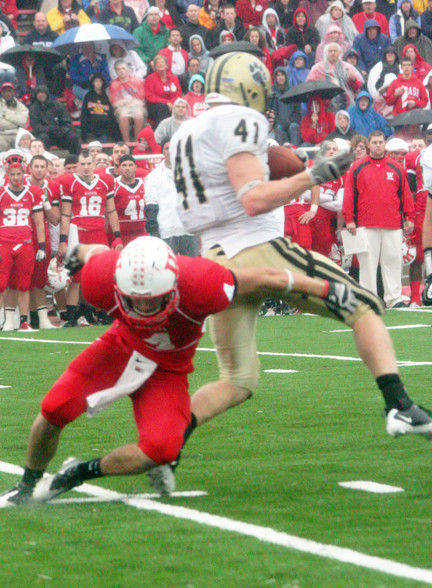 Johnathan Lambert (41) cuts of a Wabash receiver to make an interception in the first half of Saturday's Monon Bell Classic.

It's the most one-sided game since the Tigers fell by the same score in 1952. Only two games in series history have been more lopsided.

"I didn't see our football team, that's for sure," Long said.

With rain coming down most of the afternoon, the football was slippery, as was Wabash's field turf. Both teams struggled to find their way in the early going.

However, when Wabash (8-2, 5-1 NCAC) found a little something with a six-play 34-yard drive in the middle of the first quarter. When Spencer Whitehead's 43-yard field goal gave them a 3-0 lead, it did not appear that would be the winning score.

However, DePauw continued to flounder throughout the day. There were skipped passes, dropped passes, no running room and lots of balls on the turf.

Trailing 12-0 approaching halftime, it looked as though DePauw could put a bad half behind them, down just two scores at the break. However, the snap on a punt attempt sailed over the head of Adam Hill, who could only fall on the ball at the DePauw 26.

Wabash had a first and 10 deep in DePauw territory with just 55 seconds on the clock.

The Little Giants smelled blood, and two plays later, Chase Belton found Geoffrey Wright in the end zone and a 19-0 lead at the half.

The floodgates really opened in the third quarter, as Wabash scored touchdowns the next four times it touched the ball. The Tigers simply had no answer for the Little Giants running attack, particularly the quarterback draws from Belton and Tyler Burke.

"We have to take better care of the football. We can't allow people to run the football the way they did that. That's not us."

While each team had three turnovers, it was Wabash who capitalized, turning the giveaways into 14 points.

The offensive struggles may have been even more surprising, though. The passing attack that had averaged 309 yards per game managed just 84, as Michael Engle was 12-for-33 with two interceptions. Brayden Dahlstrom led the team with four catches for 35 yards. All-American Alex Koors had just three grabs for 24 yards.

On the other side, Wabash's two-headed quarterback attack of Burke and Belton was 12-of-19 for 206 yards, four touchdowns and just one pick.

The Little Giants more than doubled their average running output, with 57 rushes for 292 yards. Derrick Yoder led the way with 164 yards on 24 carries.

"We played a great football team today, and we didn't play very well," Long said. "And that's what happens when you play good football teams and you're not at your best."

The Tigers came into Saturday with a playoff berth assured, but unsure of who or where they would play. A win might have solidified their shot at a home game next Saturday.

A big loss made that a long shot, but the Tigers will in fact host.

DePauw will host the Trine University Thunder Saturday at noon.

After Saturday, the opponent isn't really the issue. The Tigers had a good thing going for nine games. They will have to find it again this week.