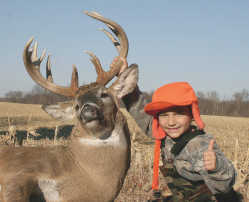 Wyatt Clark, 6, stands next to the 205-pound, 13-point buck he shot on the opening gun hunting day of deer season Saturday. Clark is a kindergarten student at Peace Lutheran School and is the son of Jeremy and Marta Clark.

GREENCASTLE -- Wyatt Clark may be a little guy, but he bagged himself a big prize on the opening gun hunting day of deer season.

Wyatt, 6, went deer hunting for the first time on Saturday -- and came home with a 13-point buck he shot with a 44-magnum rifle.

"We're going to hang the horns on the wall," Wyatt said proudly.

Wyatt, a kindergarten student at Peace Lutheran School in Greencastle, is the son of Jeremy and Marta Clark.

The hanging of the horns, Jeremy said, caused some debate in the Clark house.

"My wife said at first that we had enough deer heads on the walls," he said. "But since these were Wyatt's, she had to melt."

Wyatt and his father spent the night in the wild Friday, and woke up bright and early to begin their hunt.

"We have a shack out in the woods on our property that we slept in on Friday night," Jeremy said. "It was in the afternoon -- probably about 4:30 -- when Wyatt got his buck."

Jeremy got a deer before Wyatt did, but it wasn't a big as Wyatt's.

"I got an 8-point (buck) and a doe about two weeks earlier, and I thought I was pretty lucky," Jeremy said with a chuckle. "The government is renting our land. It's a reserve program ... they're growing wild grass to maintain wildlife habitats. It must be working."

Most of Wyatt's deer will go to Marta's parents.

"A lot of people will be well-fed," Jeremy said.

Wyatt has accompanied his father on hunting trips before, but this was his first time to actually hunt himself.

It also took longer for Jeremy to make his first kill.

Wyatt excitedly recalled the moment when he took the buck.

"I shot at it three times," he said. "It dropped like a sack of potatoes."

When asked if he thought the kill was a result of luck or skill, Wyatt became very modest.

Wyatt wasn't afraid of the big gun he used to bag his buck. He had practiced shooting it before opening day.

"It's got a fair amount of recoil to it," Jeremy said. "He'd shoot it and I'd notice water coming out of his eyes, but he wanted to practice with it. He shot a pumpkin four times at 60 yards the weekend before opening day."

Jeremy said Wyatt dropped the buck on the first shot.

It was Jeremy's father who got Jeremy interested in hunting. He still hunts himself, "but he missed Saturday," Jeremy said.

Wyatt is quite the outdoorsman. In addition to hunting, he enjoys four-wheeling on his family's 160-acre farm. Wyatt also likes to shoot his BB gun.

Wyatt also enjoys other types of hunting besides deer hunting.

"He went on his first hunt and got a squirrel a couple of months ago," Jeremy said.

Comments
View 23 comments
Note: The nature of the Internet makes it impractical for our staff to review every comment. Please note that those who post comments on this website may do so using a screen name, which may or may not reflect a website user's actual name. Readers should be careful not to assign comments to real people who may have names similar to screen names. Refrain from obscenity in your comments, and to keep discussions civil, don't say anything in a way your grandmother would be ashamed to read.
Respond to this story