Members of 'The New Class' 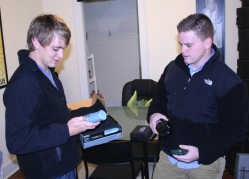 Chris and Nate Lien show some of the equipment they use when conducting a paranormal investigation. The Liens and other members of Hoosier State Paranormal will be at Buffalo Wild Wings on Sunday to watch the television pilot they filmed with A&E. Banner Graphic/JOSH GARVEY

GREENCASTLE -- Some local ghost hunters will be celebrating the premiere of a television pilot they're in at Buffalo Wild Wings this Sunday.

Members of the Hoosier State Paranormal group filmed a pilot for A&E called "Paranormal State: The New Class." The show will air this Sunday at 9:30 p.m.

Chris Lien is the founder of the group. Lien, a graphic design major at Ivy Tech Community College, made the group's website as a part of a graphic design project. He said he was initially skeptical when a producer contacted him regarding the show.

"Last summer we got an e-mail from a producer who worked on 'Paranormal State,' the original one," Lien said. "Her name is Libby Niles. The e-mail literally said, 'Hey, I'm a producer from L.A., I want to do a show about your group.'"

The original "Paranormal State" is a show focused on the Pennsylvania State University Paranormal Research Society, which has college students investigating allegedly paranormal phenomena. Lien and his group have no connection to that group, though the production crew has some overlap.

After searching for Niles on Google, Lien and the other members of the group began talking to her and another producer about first making a short video sample and then a full pilot episode. If the reaction to the pilot is positive, the show could be turned into a series.

"It was a very long process," Lien said. "We found out about it last July or last June and we're just now airing the pilot in November. We've known about it for a while, but they were like, 'Nope, don't say anything to anybody.'"

Lien said the producers didn't contact him regarding the pilot's airdate. He said the star of a different paranormal show on A&E, Chip Coffey, sent them an e-mail that alerted them to it three weeks ago.

Most of the other members of Hoosier State Paranormal who appear on the pilot are members of Lien's family. That includes his brother, Nate Lien, his sister, Savahanna Wise, her husband Stephen Wise and unrelated members Daniel Hendry and John Tenney. Chris Lien said part of the group being related was emphasized during the show, as was their jobs.

"We all work as EMTs at Operation Life," Lien said. "Our thing that they're playing off of is that we're all related and we all work in EMS."

Nate Lien said although there was a period of adjustment, it became second nature to carry on a conversation with a camera crew around.

"Initially it's obviously going to be weird, having cameras all over you," Nate Lien said. "They tell you from the beginning to just do your thing and just act like they're not here. After a while it got to where it was really like that. You just forgot about them and they just let you do what you wanted to do."

Chris Lien agreed with that assessment and said they were able to conduct their investigations as they normally would.

He also said the show has them investigating a mother and two daughters in North Carolina. He said the group tried a variety of experiments during the episode.

"We wanted to try a couple of experiments that we've done before but that we've never seen before on TV," Chris Lien said.

Chris Lien said they used what's called a Frank's Box, which uses a modified radio that continually scans through stations to try and hear electronic voice phenomena -- a word or phrase in static.

Chris Lien said one of the downsides to the pilot is trying to go forward with his life while still being able to do a season of the show, if it is picked up. Since the group is self-funded, he doesn't make any money from any of the investigations Hoosier State Paranormal does.

He said he hired a broker to help start up a graphic design business, but those plans have to wait until he knows if the show is getting a full season or not.

"I've literally put my life on hold, because if I open a business then they pick us up for 20 episodes I'm going to be gone for 20 weekends out of the year," Chris Lien said.

Chris Lien said the group will find out if the show is picked up for a full season in December.