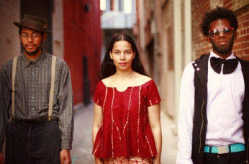 Presented by the DePauw Performing Arts Series, the music will begin at 8 p.m. in Moore Theatre, located in the Green Center for the Performing Arts, 605 S. College Ave.

There are no reservations; seating is first come, first served. Doors will open at 7:30 p.m.

Carolina Chocolate Drops -- Dom Flemons, Rhiannon Giddens and Justin Robinson -- have been playing music together as a trio since the group formed in 2005 following the members' pilgrimage to the Black Banjo Gathering in Boone, N.C.

The Chocolate Drops play a combination of traditional stringband music and newer compositions rendered in a traditional style, all flowing out of the traditional Piedmont style native to the Carolinas.

In particular the Chocolate Drops have been heavily influenced by the great African- American oldtime fiddler Joe Thompson.

Adding occasional bones, autoharp, jug and snare drum to the ubiquitous guitar, five-string banjo and fiddle, the Carolina Chocolate Drops are one of the only African-American traditional stringbands in existence today.

Over the years since the World War II a few individuals kept with the traditional music, and now, thanks to young innovators such as Carolina Chocolate Drops, the music is enjoying a bit of a renaissance.

They have appeared on numerous public radio programs such as NPR's Fresh Air and have opened live performances for such folk/roots luminaries as Taj Mahal.

For information about the Nov. 30 concert at DePauw, contact Ron Dye at rdye@depauw.edu or 658-4689.