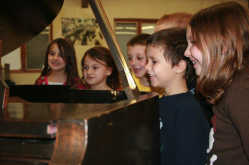 BAINBRIDGE -- Ken and Judy Rozelle received several phone calls in response to an ad they placed online to give away their Bauer Brothers baby grand piano.

But when Jan Jonker, a kindergarten teacher at Bainbridge Elementary, rang in requesting the instrument be offered to the school's music room, Judy knew she had found the right match.

"It was a no-brainer for us," she said. "We were definitely going to give it to the school."

Judy posted it online as free to whoever could move it, so with the help of North Putnam staff members, maintenance workers and a school board member, the piano was transported to the school last Wednesday.

To get it through the door the moving crew had to remove the piano's legs and then reassemble them in the music room.

"Now that it's in here, it's staying put," Bainbridge Elementary music teacher Megan Allen told one of her classes earlier this week. 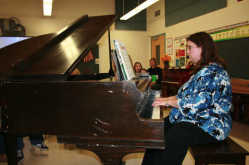 Allen plays a rendition of "Jingle Bells" as students from Laurie Hensley's second grade class sing along. A total of six people, including staff members, maintenance workers and a school board member, delivered the piano last Wednesday and had to take off the legs of the piano to get it to fit through the door's of Allen's music room. "Now that it's in here, it's staying put," Allen said. Banner Graphic/AMANDA JUNK
Order this photo

Allen said she was just as excited as some of her students when the piano was first brought into the room.

"When they brought it in I had a fourth grade class and they were very excited and said, 'Wow, this is a big piano,'" Allen said.

Cheers and raised hands greeted Allen in her music room Monday afternoon when students from Jennifer Conley's first grade class caught a glimpse -- and heard the echoes from the chords -- of the baby grand for the first time.

"Hearing the children, from any of the grade levels, come into the classroom for the first time to see it, it's just like a storybook fairy tale because their eyes light up and are so excited," Allen said.

Allen said for a school to have this kind of musical opportunity is a chance of a lifetime.

"Not a lot of schools have a chance to have a baby grand piano or a grand piano," Allen said.

As for the Rozelles, even though the piano is off their hands, hearing the stories of the instrument having such a grand effect on the students already is a lasting memory.

"We were as pleased as they were, and I know they are so excited about it," Judy said.