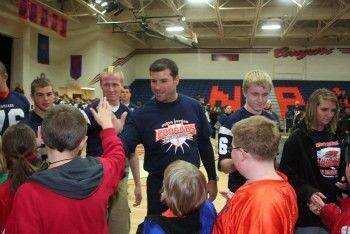 ROACHDALE -- In three years at North Putnam, Greg Barrett has experienced immense success. Only four losses hang on his record and from day one of his taking over the program, Barrett has preached a team philosophy.

Many schools dream of making it to state and many find that journey came up short. In 2010, North Putnam has taken a setback from last season and stands just one game away from reigning supreme in Class 2A.

For Barrett, as with everything else, he gave credit to the team which will be playing in its school's first state championship of any kind.

"Well I've been blessed with the talent that we've had coming through here that last couple of years. And with the hard work and commitment they've put into the program, they've just bought into everything we're doing," he said.

He praised former head coach Dave Pasch and the feeder program the North Putnam Youth Football has created. He said he believes everything has fit into place for the Cougars this season.

"It just has been a privilege to be where we're at as a group. I think we have a great coaching staff here. Right now all of the pieces to the puzzle are there. Going 14-0 and getting the chance to play in the state championship game on Thanksgiving week -- that's just an honor," he said.

North Putnam will face powerhouse Fort Wayne Bishop Luers for the Class 2A title and will be facing its toughest challenge to date. They're a multi-dimensional team that poses multiple threats.

"I think they're definitely the fastest team we're probably going to see and it's nice to say that and you know you're playing to the end of football season," Barrett said. "They're big, they're physical, and they have some great athletes across the board whether it's on the defensive side or the offensive side.

"They don't have too many guys that go two ways. We have several guys that play both sides, so the conditioning factor will be huge. It's just a great ball club and a well coached team, so we have to come out and keep executing like we have and not have the turnovers we had Friday night," he added.

They have to contain quarterback James Knapke, who has passed for more than 2,000 yards this season, including 30 touchdowns with only six interceptions. But Barrett thinks the game will be won up front.

"He's definitely a versatile guy," Barrett said. "He can throw the ball, he can manage the game -- he can run. He doesn't do a lot of running because he has a couple backs he just hands it to or he can throw it deep and hit three or four down the field. We have to make him get uncomfortable, make sure his feet aren't balanced and hopefully get him off of his standing in the pocket and throwing the ball.

Last week the Cougars defeated Evansville Mater Dei 6-0, but it wasn't a flawless game. Namely, the Cougars coughed up the ball three times, but the coach feels good about what his team can achieve if they get on top of things.

"Offensively we did some things we haven't done in a while and if we take care of those, I like our chances," he said.

Following the Mater Dei contest, Barrett said being semi-state champions and next playing in the state championship hadn't sunk in yet. The coach said it's beginning to and it will probably hit him and his team when they step on the Lucas Oil field for the first time for practice.

The journey to state in 2010 began last season when the Cougars lost a heartbreaker to Monrovia 7-6 to end their season. Barrett said he was proud with the accountability his team took upon itself to do the things necessary to make their run this season.

"It's huge. I'm extremely proud of this group of guys. They're a phenomenal group. They have good leadership from the seniors, juniors, and sophomores -- across the board they've been a blast to be around. They're not just teammates, they're best friends. That's been huge," he said.

He also stated the team does things throughout the community to help others and it's nice to see good things come to them.

"It's nice to see good things happen to good people and I think these guys deserve everything they've gotten. But they've worked hard and they've been committed to excellence," Barrett commented.

Battling on a stage as big as the state championship game, winning and losing is a reality that each team must deal with. But when asked, whether it follows a win or a loss, how he would feel walking off the field Friday evening, his pride in his squad was at the core.

"I'm definitely proud of these guys no matter what happens," he said. "I'm extremely proud of them. It's just a great honor to get where we are. Our goal was to play 15, but now our goal is to win 15. And that's a big difference. Getting there, talking about it all year, it's amazing we did it. Now we want to go and win it."