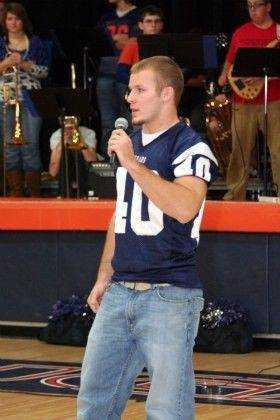 ROACHDALE -- For North Putnam team captains Nate Bryan, Travis Franklin and Hank Spencer, as well as starting quarterback Kolten Everts, they're trying to treat Friday's state championship like any other game. However, it's the biggest game of their football careers and each knows the significance of having the privilege to play on such a big stage.

"It's been our goal all year long," Bryan said. "That's what we shoot for. We had 15 on the back of our Thursday gear, so we've been shooting for that all year. All the hard work we put in over the summer, ever since last year, is paying off."

"It's just a great way to cap off the season," he said. "For me personally, as a senior, you always dream -- it just seems not real getting to play in the state championship game. It's a great way to finish off a senior year."

Looking at the stats, it's no secret what impact Franklin has on the team. He leads the team in rushing (862 yards) and in receiving (389 yards) and is one of the most potent weapons on Cougars' punishing defense.

Both he and Everts had ideas on what has made the Cougars such a success this season.

"Me and Kolten have been outside ever since last year when we got beat in the sectional championship game. Just reps, you have to rep it, rep it, rep it. Get the routes down and then just timing. Getting in the weight room and getting quicker. Coach Barrett does a phenomenal job of off-season programs. Just getting stronger and faster," Franklin said.

"I attribute our success to us being a team, playing like a team," Everts said. "Showing up all the time in the summer. The majority of it (goes) to our coaches, though. They put in a lot of time. They're just a great set of guys and they keep us playing."

Putting the time in during the off-season was a topic of discussion as well. Each player noted how important it was to work to improve their game during that time.

"Basically just what everyone else does -- lift every day, run every day and just stay focused and not slack off," Spencer said of his off-season regimen. "That's where you make your gains is in the off-season and become a better player."

With a short week due to the Thanksgiving holiday, it's a whirlwind for the North Putnam squad. Each player said while it was exciting, they take all the congratulations in stride, and while appreciative, know their work isn't quite done.

Everts discussed what impact the short week would have on the team and how they were going about preparing for the game. He simply said they were trying to keep it business as usual.

"We just try to keep it the same as normal. Do the same things every day, keep it normal, and don't do anything different -- a normal game week," Everts said.

Asked if that was a difficult task, the junior signal caller cracked a smile.

"Yeah, it is difficult. We accept the congratulations and all of that -- we love that, but the other stuff like waking up for school, we're going to wake up at the same time -- in that case (it's) normal," he said.

The Cougars will be going against a team, Fort Wayne Bishop Luers, whose only loss of the season came at the hands of Class 4A Fort Wayne Bishop Dwenger on Oct. 15. The Saints will be playing for the Class 4A title against Indianapolis Cathedral on Saturday.

The players know the tough task ahead, but intend to give the Knights all they can handle.

"We have a very good opponent, but we're good too. So it's going to be a close game, but we'll see what happens," Bryan said.

"They'll come out and they'll hit hard, they'll play hard. They'll be very fundamentally sound and it will be a tough game. We'll see what happens," he said.

The staple of the Cougar offense this year has been their ability to run the ball with great success. Franklin and Spencer have combined for more than 1,700 yards and when you add senior back Jordan Murphy to the mix, that total balloons to close to 2,400 yards on the ground.

When posed the question if he thought North Putnam could continue to run the ball successfully against Fort Wayne Bishop Luers, Spencer didn't hesitate a second with his answer.

"Yeah, I definitely think so," he said. "I think we have the heart to go out there and our wide receivers I know will block their tails off and we're just going to run it as hard as we do every other game. It's no different."