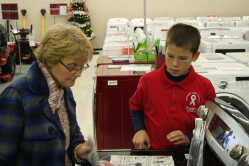 Banner Graphic/JOSH GARVEY Many shoppers were out and about on Friday. Debbie Beck goes through a Sears catalog with Cale Hausman, the son of Greencastle Sears owner Mike Hausman. Beck said that she was at the store to buy a dishwasher, and that she doesn't like going out for "Black Friday" sales.
Order this photo

GREENCASTLE -- On the biggest shopping day of the year, it's expected that everyone is going to help out.

At the Sears in Greencastle, that means family members, too. People who came in to shop were greeted by Cale Hausman, the 11-year-old son of owner Michael Hausman.

"Do you need any help finding anything?" Cale asked people who came into the store. He would then point them towards the items they were looking for.

Cale and Michael Hausman disagreed on whether Cale would be paid or not. Cale said he would be paid, but Michael told his son he wouldn't be getting any money.

Michael Hausman said that the turnout for "Black Friday" had been good for his Sears.

"We're on the same track, maybe a bit better," he said. "Tools are doing well, of course, with the sales this time of year."

He said that the "Doorbuster" sales were also very popular.

Bob Rich, the owner of the RadioShack in Greencastle, had a similar assessment.

"We were busy earlier," Rich said. "We had lots of GPS going."

Rich said that specials that are listed in fliers are fairly popular.

"That's normal for 'Black Friday,'" Rich said. "People who come in are on a mission armed with that paper."

Rich said that although the number of individual customers coming in was down some, the amount each person was spending was higher, letting his business even out.

Rich also said there wasn't a big surge of people when the store opened, because many local stores had openings at midnight.

"A lot of the people who come in here have been shopping all night," he said.

At the Peebles department store in Greencastle, store manager Jim Tucker also had similar stories. He said the store had reached 35 percent of its goal by 10 a.m.

"Anytime you can have 30 percent of your sales done in 3 hours, you're doing pretty good," Tucker said.

Tucker said that the gift items that they don't normally sell have been selling very fast because of the early bird sales.

Not everyone was pleased with the way "Black Friday" was progressing. Alan and Gale Gidcumb said that since Friday is their payday, they have to do shopping on that day. They were at Sears, but didn't leave with anything.

"I don't like 'Black Friday,'" said Alan Gidcumb. "I can't handle all the crowds."

"I usually like to go to Sears," Alan Gidcumb said. "At least we have a Sears now. We used to have to drive a ways to get to one."

Gale Gidcumb tried to balance Alan's frustration with the day.

"Not that we have anything against them, mind you," she said.