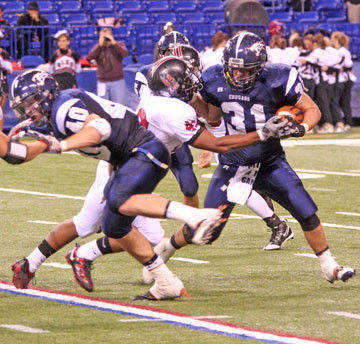 North Putnam senior Jordan Murphy (31) runs behind the block of junior Hank Spencer (40) during the first half of Friday's IHSAA Class 2A State Championship.
Order this photo

North Putnam had moments of brilliance, but costly penalties and miscues at inopportune times cost the Cougars greatly Friday. The Cougars had nine penalties for 57 yards in the contest and two fumbles, losing one of those.

Cougar head coach Greg Barrett struggled to pin down what was the cause of his team's penalty issues.

"I thought we played hard, we left everything out here, but we have turnovers and that's what hurt us. We shot ourselves in the foot. I thought we ran good on the edge, I thought we mixed up our game a little bit," Barrett added.

Following a three and out to start the game, Caleb Vondersaar breathed new life into the Cougars after intercepting James Knapke on the Knights' second play of the game.

The Cougars began to move the ball downfield, but two mishandles by quarterback Kolten Everts, followed by a sack set a tone for the Cougars that plagued them much of the first half and part of the third quarter.

In contrast, Fort Wayne Luers picked Everts off in the second quarter and the Knights offense wasted little time finding the endzone.

On its next possession, Luers was marching toward the endzone and when North Putnam's Allain St. Victor was called for pass interference, it gave them the shot they needed. On the next play, Ken Mullen zigzagged from eight yards out to give Luers the 7-0 lead with 3:40 remaining.

The Cougars began their own impressive drive with Tyler Shorter picking up an 11-yard gain, followed by a 42-yard gallop from Travis Franklin that put the Cougars within striking distance.

But North Putnam was pushed back by a sack and ended up facing a fourth and 10 with less than a minute to go. Barrett kept his offensive unit on the field and Everts connected with a streaking Jordan Murphy for what appeared to be a 10-yard gain. However, after the official spotted the ball and the chains were called out, it was determined the ball was a yard short and Cougars' quest for the endzone stalled.

Being down just a touchdown entering the second half, North Putnam was well within striking distance. Unfortunately the Knights hit the turf running and put the Cougars in a hole they wouldn't be able to escape.

The Knights opened the second half with an eight-play scoring drive and followed that up with a seven-playing scoring drive a the 1:24 mark of the third quarter to take a 20-0 lead into the final stanza.

North Putnam capped a 10-play scoring drive with 9:33 remaining in the game when Franklin rushed in from 11 yards out to give the Cougars their first score of the evening.

Caleb Vondersaar collected his third interception of the night on the Knights next drive and the Cougars looked to be back in business. The momentum had shifted in their favor and it looked as if North Putnam was beginning to warm up.

But on the very next play, the Cougars laid the ball on the ground and defensive end Evertt Green scooped it up and ran it back for a score, giving Luers a 26-7 lead.

North Putnam scored the final touchdown of the evening as Luers faced a fourth and three deep in their own territory. With the Knights forced to punt, Barrett unleashed his Cougars and Hank Spencer bulldozed his way through and blocked the punt and teammate Travis Kratt swallowed it up in the endzone to pull the Cougars within 12 point at 26-14.

"We knew we could get this down here," Barrett said. "I felt good about that and there's maybe a couple times earlier we thought we could get some things going for us and we couldn't. We got that going; we took advantage of it and punched it in there. Like I said earlier, the interception we get down here and then we just drop the ball. I don't know what happened. Those things can't happen in a state championship game.

But time wasn't on North Putnam's side and the clock ran out on their magical season, with Fort Wayne Luers winning 26-14.

While the loss was a disappointing moment across the board for North Putnam, Barrett, Franklin and Vondersaar were proud with what their team achieved in 2010.

"I'm very proud of this group," Barrett said. "They're an awesome bunch of kids, and I tell you what, they do all the right things and it showed out here tonight. That's a good team. They have some fast kids. We'd have containment and a lot of times they beat us with their speed."

"We're definitely disappointed the outcome wasn't how we wanted it, but everyone just left it on the field. No one has any regrets. Everyone played their heart out and we just never gave up. I love these guys. They're like my brothers. It's just an amazing feeling," Franklin said.

"I'm proud of our season," Vondersaar added. "I think we have a pretty good shot against them. I think we could have come out the winner, but obviously all the team that lose are going to say that in a close game like this. I'm just proud of the team mainly and we gave it a lot of heart I think."

Franklin was named the Phil N. Eskew Mental Attitude winner and quickly turned the spotlight from himself to his coaching staff.

"It just indescribable," he said. "I attribute it to all the coaches and how their character shows and it just rubs off on me. If just proves that all the hard work's paying off."

"That's great," Barrett said of the award. "It couldn't happen to a better kid. He's come a long ways from last year to this year, he really has. He does all the right things in the classroom and the community. It's just a great honor for him, it's a great honor for our school and our community. I'm very happy for him."

Vondersaar had a great game for the Cougars collecting three interceptions as well as hauling in one catch for 27 yards. In regards to his defensive effort, he said Knapke's body language spoke volumes.

"Just reading the quarterback and the receiver," he said of getting his interceptions. "And dropping back I can tell when he comes up there, he's all tense getting ready to go out for a pass and normally he's relaxed when he goes up to the ball. I just read off the receiver mainly.

"It feels phenomenal really. I could never imagine getting three picks in a big game like this -- state. I'm just really excited about it," Vondersaar added.

Their season goal was 15 wins and the Cougars came up one short, but Barrett was nothing but proud of his team.

"I'm very proud of this group. They're an awesome bunch of kids, and I tell you what, they do all the right things and it showed out here tonight," he said.

"I'm very proud of how our seniors and juniors played tonight. They all pulled together, hit some adversity and pulled themselves out of it. It was just a little too late there toward the end. We needed a better first quarter," Barrett added.

The Cougars end their season as state runners-up with a record of 14-1.