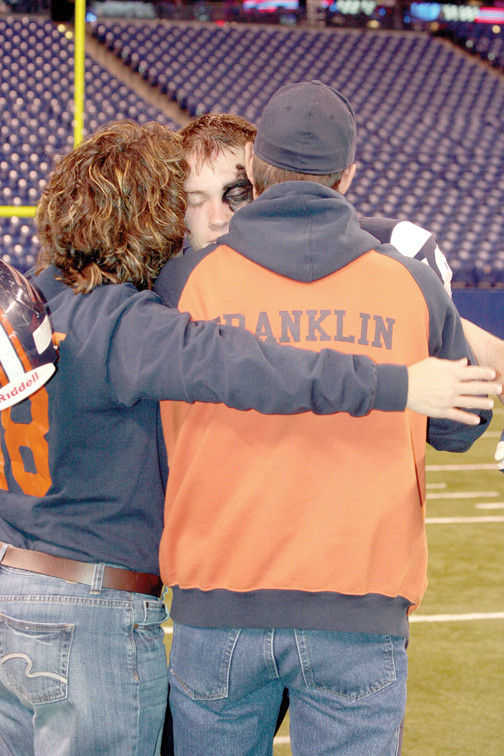 INDIANAPOLIS -- Friday night at Lucas Oil Stadium didn't go the way the North Putnam faithful had hoped, as the boys in blue and orange fell to Fort Wayne Luers 26-14.

But the night came with a sign that one Cougar is doing a lot of things right -- both on and off the field. Not only did senior Travis Franklin have a game-high 174 yards, but he was honored after the game as the Class 2A recipient of the Phil N. Eskew Mental Attitude Award.

The award is named in honor of the late Phil N. Eskew, third commissioner of the IHSAA, who guided the Association from 1962 to 1976. Under his direction, the IHSAA football tournament was initiated in 1973.

The recipients of this award, nominated by their principal and coach, must excel in mental attitude, scholarship, leadership and athletic ability in football.

From day one of taking over the football program three years ago, Coach Greg Barrett has been preaching character as the number one goal of his football program. Seeing one of his players honored with the award was that effort coming to fruition, even with the sting of defeat.

"I'm very proud of Travis," Barrett said. "I'll tell you what, that kid has come a long way from last year to now. He's done all the right things -- he works hard in the weight room and the classroom and the community. It couldn't go to a better person.

"He had a great game. I'm very proud of his efforts tonight," the coach added.

For his part, Travis showed why he deserved such an honor, taking the praise and giving credit to those around him.

"It's just a great feeling -- not just athletically, but academically and in the community," he said. "This team does so much good stuff. I attribute all of my success to the coaches. They do a phenomenal job."

The moment Travis' name was announced was also special to parents Lee and Steve Franklin. It was a special moment as tears flowed for Lee, and Steve picked his son up in a huge bear hug.

With so many parents having to stay on a high school boy to work as hard at academics as they do at football, Lee seems to know they are fortunate with Travis.

"I think he's worked hard -- extremely hard -- and he's just an awesome young man," Lee said. "He has just come out, stepped up and worked hard in the offseason, and just worked really hard in his academics. He is maintaining a 3.5 GPA, plus being able to play and do as well as he has, I'm just extremely, extremely proud of him."

For Steve, who coached Travis in his younger days, the payoff in high school has been something he saw coming years ago.

"He's a very coachable kid. That's one thing I'm very proud of because I was his coach," Steve said. "I love the fact that he's coachable and once he passed on to junior high and high school, he carried that on.

"I knew that these guys were going to be a special group way back when they were in youth leagues."

As part of the award, Indiana Farm Bureau Insurance awards a $1,000 scholarship to the school in the name of the recipient. But the money in his name won't be the only impression Franklin leaves on North Putnam.

"He's an outstanding young man. It was a pleasure writing a recommendation for him," principal Alan Zerkel said. "I thought he was an excellent choice by the coaches as a nominee."

Zerkel added that Travis should be as proud of this award as any he could receive.

"I've always thought the mental attitude award is one of the highest awards you can get in any sport. That's why it's so impressive," Zerkel said.

And while the night didn't come out as Travis and his teammates would have liked, he knows this has been a dream season and has enjoyed the ride.

"It was just amazing to get here. I've always dreamt of it, and it finally came true," he said. "The outcome wasn't how we wanted it, but it's just phenomenal to be here. I wouldn't trade any of these guys for anything. They're like brothers to me."