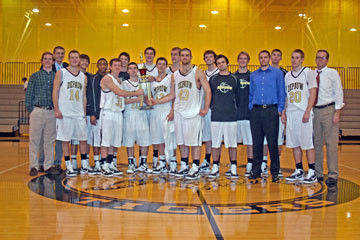 GREENCASTLE -- The Mike Rokicki Community Versus Cancer Challenge has been a showcase for the DePauw University men's basketball program while simultaneously raising money in the fight against cancer.

In seven previous of the challenge, DePauw has been a winner in all but one year. They added a seventh win this year after knocking off Rockford College 97-79 Saturday and Ohio Wesleyan University 62-49 on Sunday.

The Saturday contest was one of constant movement. Rockford and DePauw was a scoring fest as the Regents played a frenetic style of game that forced the Tigers out of their comfort zone. Early foul trouble and injuries also forced DePauw to mix and match line-ups.

Even being up 11 at halftime, the lead was not safe until late in the contest.

Rockford twice cut the Tiger lead down to six points, but could get no closer as the Tigers hit all but one of their last 13 free throws in the final five minutes to seal the game and advance to the championship game of the Rokicki Challenge.

"We gave up a bunch of lay-ups and I thought we just weren't very good defensively. They were isolating us when we weren't really helping each other very well. The bottom line is, you can't be giving up 80 points and be successful very often," Fenlon said.

"The good news was they weren't doing a good job of guarding us either. We were able to seal the game as a result, but we weren't really attentive to helping each other defensively.

"Offensively we were efficient. We didn't turn the ball over a ton, a little more than we'd like to, but we were able to shoot 55 percent from the floor. I did think that we handled the things that they were throwing at us defensively pretty well. It's the defensive end that we need to get shored up," Fenlon added.

In the championship game, they met Ohio Wesleyan, who had knocked off previously unbeaten Indiana University-East Saturday.

The Battling Bishops played much tighter defense than Rockford had the previous evening, leading to a much tighter contest early on, as both teams struggled to make an early impact on the game.

The Tigers would trail for a large chunk of the first half, as Ohio Wesleyan contested every shot DePauw took.

The Tigers grabbed the lead as part of an 8-4 run late in the first half to go up by five. The last basket of the first half, and the only one in the final three minutes, was knocked in by the Bishops, closing the half with DePauw leading 27-24.

Wesleyan was slow out of the traps to start the second half, and DePauw took advantage, going on a 12-2 run in the opening four minutes of the second half to build up a 13-point lead. Over the next eight minutes, though, the Bishops settled back into the game and frustrated DePauw's shooters.

The Tigers only mustered six points during that stretch and Wesleyan came within a point of taking the lead away from DePauw. The hosts held on, however, and slowly rebuilt their lead as the defense held the Bishops to five points over the last eight minutes.

While not as offensively flashy as the previous contest, the style of game was better for Fenlon and the Tigers.

"Ohio Wesleyan is a lot more like the teams that we're going to play in our league. They're not quite as loosey-goosey, they run more stuff. Last night, Rockford was doing more, changing their defenses, junking it up a little bit. We don't see that a lot. This was a more straight-up sort of game," Fenlon said.

"The match-ups were a little more favorable for us. They played two post players at the same time and so were we. We didn't have a post player guarding someone out on the perimeter, which is what was happening a lot last night. In terms of getting ready for the bulk of the teams on our schedule, this was a better game."

The 4-0 Tigers get little time to enjoy the victories, as they host 6-0 rivals Wabash Wednesday. The Little Giants are coming off an impressive 60-45 win over Division III No. 2 ranked Randolph-Macon Saturday and will look to extend their impressive start.

It's a simple proposition for Fenlon's Tigers.