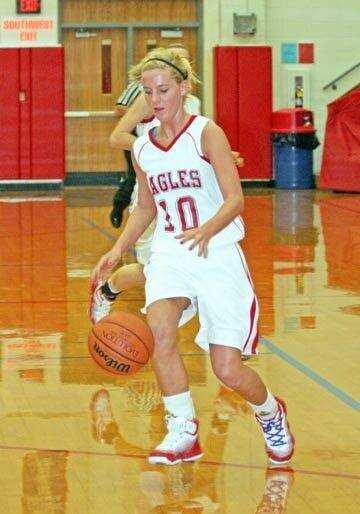 GREENCASTLE -- South Putnam's girls' basketball team knew it had an uphill challenge against a tough, hard pressing Cascade squad that was the WCC runner-up last season and off to a 6-1 start this season.

The Eagles battled well in the first half before increasing pressure from the Cadet defense finally overtook the hosts, allowing Cascade to coast to a 77-44 win.

The contest was wide open in the early going. Unable to keep the Eagles in the backcourt, Cascade was vulnerable when the ball reached the basket.

The visitors would be able to offset this by using great passing and good inside play.

Both squads were solid, shooting the ball well through most of the first half.

The Eagles, who trailed by four at the end of one and by six at halftime, 37-31, did not allow the Cascade full court press to pin them in and force many turnovers.

This would change in the second half as the Cadets ratcheted up the intensity on defense to another gear and took the hosts out of the game.

Unable to move out of the backcourt on many possessions, the Eagles only mustered 13 total points in the second half.

Cascade took full advantage of extra possessions, scoring 20 in both the third and fourth quarters to run away with a 33-point win.

While Eagle head coach Debbie Steffy was happy with parts of her squad's performance, there are still things to work on.

"We saw a lot of good things out of our team," she said. "We did some things really well and those are the things we're going to build on. Yeah, we're disappointed because we got beat but we really felt like we did some good things that we can build on for our next opponent.

"We talked about it at halftime that they were going to come out in the second half and turn up the pressure on their press because in the first half, we had problems but we were able to break it OK," Steffy continued. "We knew that they'd come out and turn the pressure on us and they did and we turned the ball over more."

Owen Valley is next on the docket for South Putnam, a squad the Eagles have not beaten in six years. Much of the preparation for South, though, will be a continuation of the good from Friday night.

"We're going to try to build off this game. We felt like we did some things well tonight and we're going to use those as stepping stones to try and get better for our next game," Steffy said. "We're going to continue to shoot the ball the way we did early in the first half tonight and do a good job on defense, keep them from scoring easy points and closing out on shooters so we don't give up easy shots."