Greencastle continues to roll with win over Cloverdale

By ANDY BARRAND For the Banner Graphic 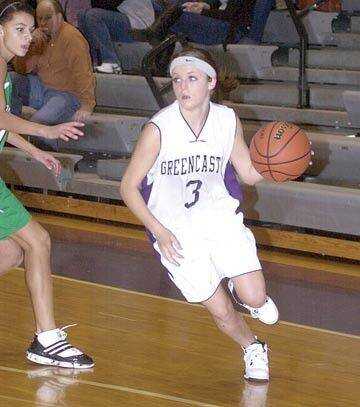 Greencastle senior Alyssa Nichols turns the corner on a Cloverdale defender on her way to the basket during Friday night's game.

GREENCASTLE -- It was experience versus youth in Friday night's match-up between the Greencastle Lady Tiger Cubs and the Cloverdale Lady Clovers.

Starting one junior and four sophomores, the Clovers were filled with younger players who continue to learn game by game. The Cubs, however, started a much more experienced line-up with three seniors and two juniors.

Unfortunately for the Clovers, the Cubs were on their game Friday night and were more than the young team could handle. Greencastle ran away from their county rivals, defeating them by a final of 71-24 to open up conference play.

"We have a young team that went up against a veteran team tonight," said Cloverdale coach Tom Anderson. "They are a very nice club. We strive to be that good someday."

Going into the game, Greencastle coach Brad Key wanted to get his team off to a fast start -- something they have been focusing on in practice. To help his team get a jump, Key had the girls press at the beginning of the game.

The Cubs pressing defense caused several turnovers, leading to easy baskets and helping the team take a convincing 21-5 lead after the first quarter.

"We did a good job of defense tonight leading to easy baskets," said Key.

Key credited his senior, Chelsea Samuels, as being key to helping the team win.

"Chelsea was physical and tough down in the box leading to shot on the perimeter," he said. "Mallory Miller and Alyssa Nichols both had good games."

Miller led the way for the Cubs, scoring 22 points on the night. The team shot close to 50 percent from the field, going 27 for 55. Eight players contributed points in the win. The next leading scorer was Nichols with 17.

The leading scorer for the Clovers was sophomore Paige Gruener with 10 points, including two three-pointers.

Anderson said he will continue to stress the importance of not giving up and playing a full 32 minutes during practice as the team looks forward to Monrovia next Friday night.

Greencastle is 8-3 on the season and will travel to Rockville on Thursday.