Rodriguez hits the mark with 'Machete' 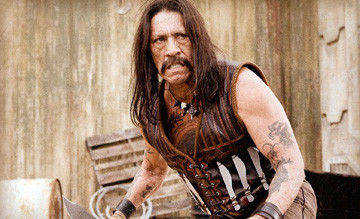 Robert Rodriguez is quickly become the king of modern day schlock-tribute films. All of his adult targeted flicks have elements of schlock, but his latest release "Machete" is by far the most grandiose. It's bloody, it's messy and it's a darn good time. It's part B-movie masterpiece and part western, but 100 percent an awesome flick.

Based on the fake trailer attached to "Grindhouse," "Machete" features Rodriguez staple Danny Trejo in the lead role as a former Mexican Federale who's left for dead after a failed attempt to rescue a kidnapped girl.

He resurfaces in Texas as a day laborer and is approached by Michael Booth (Jeff Fahey) to silence an outspoken senator McLaughlin (Robert DeNiro) who is known for his hard stance against illegal immigration.

After being double crossed and shot during the assassination, while he's on the mend, Machete teams up with Luz (Michelle Rodriguez) and Padre (Cheech Marin) to take revenge on Booth. He also teams up with Agent Sartana Rivera (Jessica Alba), an immigration officer who's on the trail of "She," the mysterious leader of the Network.

While tracking down Booth, Machete stumbles upon Booth's naked wife June (Alicia Rachel Marek) and daughter April (Lindsay Lohan) videotaping themselves in a pool. He seduces them and kidnaps them as he gathers the evidence Rivera needs to put McLaughlin and Booth away for good.

After discovering Padre semi-crucified in his church, Machete sets out to finish his task of taking out Booth and McLaughlin.

Everything begins to unravel for the duo at a press conference when video of McLaughlin killing illegal immigrants and Booth killing Padre are aired. Shortly thereafter, McLaughlin kills Booth and seeks refuge with Von Jackson (Don Johnson), the leader of a group of border vigilantes.

Everyone converges on Jackson's compound for one last epic hurrah, with more over-the-top bloody action.

Also joining the party is Rogelio Torrez (Steven Seagal), the Mexican drug lord who killed Machete's wife and daughter and left him for dead. The duo engage in a battle of the blades with a twist (literally) in the outcome.

And in true western fashion, the hero rides away into, in this case, the darkness to fight another day.

Rodriguez is one of the most stylistic directors in the business. Every frame of "Machete" has his essence on it and his ability to produce a film that delivers a good time is almost unparallel. Rodriguez drowns us in blood and leaves us laughing throughout the film.

Trejo, in his first starring role, is his typical self. A hard-nosed character who we can root for, yet never would want to show up on our doorstep. He does a fine job carrying Rodriguez's newest down and dirty flick.

The biggest disappointment for me came when I hit the extras button. You'll find a few deleted scenes, a few trailers, including a red band trailer and a useless audience reaction commentary track. It literally is a track of applause and yells for the duration of the film. Why would I want to watch the film with that?

One of the joys of popping in a Robert Rodriguez film is you're sure to find his infamous "10-minute Film School" or "10-minute Cooking School". Not here. They are nowhere to be found. Also the lack of a director's commentary track is a major disappointment.

Final Cut: While "Machete" probably won't win him any new fans, the film is what any fan of Rodriguez wants and expects. It's stylistic B-movie bliss that's dripping in faux blood that's sure to please any diehard fan.