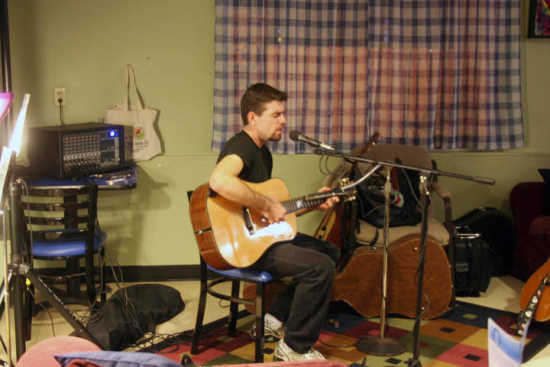 Christopher Hurst, son of the late musician William Edward Chandler, plays Eric Clapton's "Tears in Heaven" during his portion of the open mic memorial at the Blue Door Cafe Wednesday night. Christopher, along with his brother James, performed during the memorial along with many other musicians to honor the memory of Hurst's father.

GREENCASTLE -- Wednesday night is usually the open mic night at the Blue Door Cafe, but this event was different. Friends, family members, and fans of music gathered together in memory of William Edward Chandler, who passed away on Dec. 24, 2010 after a long battle with leukemia at the age of 48.

"My dad was a musician," said Christopher Hurst, one of Chandler's sons. "Yeah he had a day job, but his main thing was a musician."

Hurst, along with Ryan Puett, organized the event at the cafe, creating a Facebook group and letting people know about the event. Hurst felt this would be the best way to honor his father, who had left him and his brother James Hurst one guitar each.

Despite being diagnosed with an upper respritory infection five days before his performance, Christopher said he felt well enough to play.

"We thought the best tribute to his life and love for music (would be) to just get up and play," Christopher said.

Many musicians, including both Hurst sons, played at the event, singing songs from Eric Clapton, Tom Petty, Sublime and other artists, as well as some original songs.

There will also be a memorial set at the 2011 RMMGA (rec.music.makers.guitar.acoustic) Texas Gathering in October in Wimberley. Chandler loved attending this event every year and performing. He also made many friends there and always looked forward to the trip.

The family has asked that in lieu of flowers or services, a donation be made to the Leukemia and Lymphoma Society.