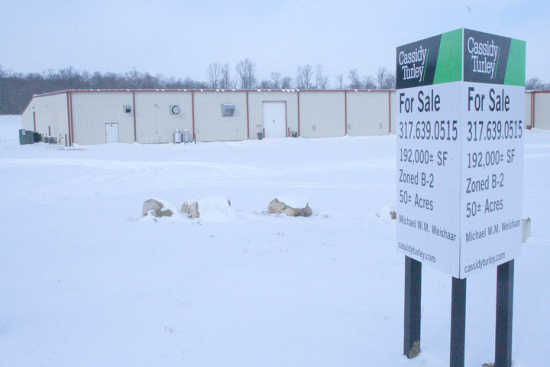 This sale sign sits in front of the Crossroads USA Arena and Expo Center in Cloverdale. The building is in receivership after Huntington National Bank filed a lawsuit against the owners for failing to make payments on the loan used to purchase the arena.
Order this photo

CLOVERDALE -- Crossroads USA Arena and Expo Center in Cloverdale is up for sale.

Huntington National Bank (HNB) has filed a lawsuit against the owners of the arena, and the facility has been placed in receivership.

According to court documents, attorneys for HNB first filed complaints against Steve Jackson, Brent McCammack and James Skinner of Crossroads USA Arena & Expo Inc. on Jan. 14, 2010 for failure to make payments on the loan used to fund the purchase of Crossroads.

The owners of Crossroads filed for bankruptcy in late February 2010. All pending litigation in the case was put on hold when the bankruptcy was filed.

A summary judgment and decree of foreclosure against the defendants for $4.8 million has been granted, and Cassidy Turley Midwest Inc. was named the receiver of the property.

According to law.com, receivership is "the process of appointment by a court of a receiver to take custody of the property, business, rents and profits of a party to a lawsuit pending a final decision on disbursement or an agreement that a receiver control the financial receipts of a person who is deeply in debt (insolvent) for the benefit of creditors."

Crossroads has been host to Indiana Quarter Horse Association sanctioned shows, the Blue Denim Charity Horse Show, the National Congress for American Shetland Pony Club and other equestrian events. It has also been home to monster truck events, a bike race and rodeos.

Robert Perry, attorney for the defendants, declined to comment on the case.

Phone calls to representatives from Crossroads were not returned as of press time.