Knit Knite provides fun activity to those with patience 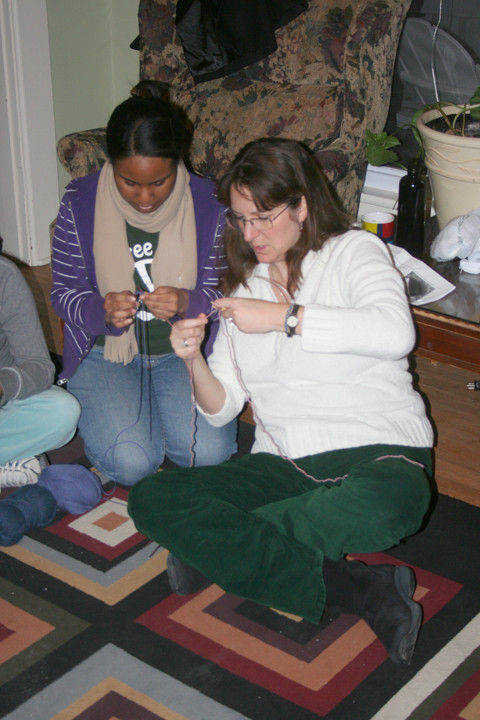 Valerie Rudolph and senior Kandis Howard work on their slipknots and start knitting at Monday night's Knit Knite. The group learned several knitting techniques in their meeting and continue to work on what many in the group will call their first project: a winter hat.

GREENCASTLE -- During DePauw's winter term, work is only as hard, or enjoyable, as a student lets it be. Whether or not a student chooses to take a class, those that stay on campus for the term can find many different activities to keep themselves entertained. Seven female students decided to take up one of those activities on Monday night: knitting

Kate Smanik, director of Spiritual Life on campus and one of the Knit Knite's two organizers, gathered the attendees in the center's lounge, handing them 4-and-a-half inch needle sets, yarn, and directions to create a winter hat.

"A hat is not a simple project," Smanik said. "And the first week is the hardest. The reward is you will know almost all the things you need to know (for future projects)."

Being able to create a hat involves learning many of the techniques necessary to make other smaller items like socks and scarves, though larger items like sweaters require more complicated techniques, Smanik said.

Knitting, not to be confused with crocheting, which involves using a crochet hook to create patterns, is often seen as the hobby of the elderly spinster that sits in a rocking chair and makes socks or sweaters for her grandchildren. But there were no creaky rocking chairs to be found in the group, just the sound of knitting needles colliding, along with the smell of homemade black bean soup -- Smanik and fellow organizer Valerie Rudolph, coordinator of the Compton Center for Peace and Justice, always cook for vegetarians if necessary -- which the group ate just moments before.

The group was mostly new. Only senior Gretchen Kasting had returned from the previous class. But she was able to show off the knowledge and skill she acquired the previous week to the rest of the group. She had gotten through several rows of her hat and demonstrated solid technique in the process. One of the new students in the group, April Rodriguez, said she wanted to take what she learned from the class and replicate a bandana her friend gave her.

"I have a bandana and I wanted to learn how to make my own," Rodriguez said.

But a new group brings new challenges, and Monday's challenge involved the very first step: using the needles to create the 90-102 stitches for the first row, evenly distributed over three needles, creating a place marker and joining them together.

"This step is going to take the rest of the night to do," Smanik said.

Rudolph admitted to being a little rusty with the knitting needles, but she was able to show off a trick to help the group create a slipknot, which is a knot that is tight but able to slide down the length of the yarn and is a necessary beginning step for any knitting project.

As the project continued, the group was able to perfect their slipknots and begin making their rows. The project will continue at 5 p.m. next Monday, and all newcomers are welcome. However the time and date will likely change with the coming of the new term, most likely to Tuesday at 8 p.m.

"That way we can watch 'Glee' and knit," Rudolph said with a laugh.