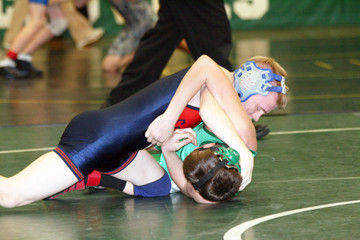 North Putnam wrestler Tyler Ruble was one of two seniors honored Wednesday at North Putnam. Kegan Foltz was also recognized, but did not wrestle due to an injury.
Order this photo

ROACHDALE -- Senior night at North Putnam High School granted an opportunity for the home crowd to see one of the Cougars most prolific wrestlers in action Wednesday night.

However, it also showcased a solid South Vermillion side who claimed all but two events in a 66-12 win that closed out the regular season for the Cougars.

The Cougars honored Tyler Ruble and Keegan Foltz for their four years of wrestling. Foltz was unable to compete due to an injury the night prior while Ruble picked up one of the two North Putnam wins on the night.

His pin capped off a dominating performance in which he held a 12-0 lead in the match before finishing with the fall 1:16 into the second period.

Teammate Dean Klieber notched the other win, but nearly lost the match seconds beforehand. Reversed to start the second period, Klieber was put on his back briefly before reversing his opponent straight into a pin.

The loss, coupled with a tough meet the night prior against Turkey Run, had North Putnam head coach Kenny Kerns wondering.

"Well, we wrestled poorly last night and I thought maybe that's just a one night thing but it kind of carried over into tonight. We're just not executing like we're supposed to," Kerns said.

"I don't know how many times they keep riding on the heads and shoulders and not staying back where they're supposed to be, wrestling holding their head. It just drives me up the wall. I just don't understand it.

"I don't mean that I'm not unhappy, because I am, but we didn't give up any matches. Not one match did we just quit. We were in it, we scrapped all the way and we've got a lot of room to improve and just keep doing it. Maybe one day we'll get there," Kerns added.

Kerns did note one of the better efforts of the evening in Dean Klieber's win. He also shared something he didn't mention before the match.

Kerns also took some time to talk about seniors Ruble and Foltz.

"They've been in middle school with me. They're captains and captains for a reason. They're a class bunch of kids, don't cause any trouble. You say write this, do this, they know what I want. They police the team and do a good job of that," Kerns said.

"You know, I go, captains, here's what I want and Dean, Tyler and Keegan get it done. They're tremendous and I'd love to have five or six more kids like them. They're great."

"Tyler needs two more wins, I think, to get to the 100 mark in wins. I'll have to look at my records but he'd be the first kid at North Putnam to ever win 100 matches," Kerns added.

With the season completed, North Putnam has over a week to prepare for the sectional meet at Plainfield. Kerns had a simple plan in mind to work on.

"Probably just get back to what we used to do. For some reason, I wouldn't say we were exciting, but we were more fundamentally sound earlier than we are now. For some reason we're throwing in a lot more legs and we never used legs before," Kerns said.

"We're trying things that we don't try in practice during the meet. We've just got to go back and do what we do best. You know, don't try any fancy stuff. There's too much freelance wrestling," Kerns added.

"We'll go back to the basics and we'll be fine."